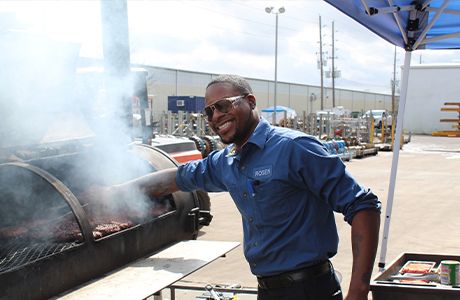 Richard is a Work Group Lead based in the United States, which means he is in charge of a team of shop mechanics. He is also responsible for assuring that each mechanic has all the resources needed to complete his or her assigned preps for the week.

FALLING IN LOVE WITH YOUR JOB

Richard joined ROSEN in 2015, and he admits he did not expect much when he first joined the company. But once he got to the first-year mark, he knew this job was special. He says that he began to not only fall in love with the people of ROSEN but the culture as well. Further talking about the ROSEN culture, Richard says, “Never have I been employed at a place where everyone just seemed to get along with one another in unison. I saw the shop to be more of a brotherhood than just guys working alongside each other.”

Richard says that his greatest accomplishments was obtaining his BBA from American Intercontinental University, which ROSEN helped pay for through their tuition reimbursement program.

ROSEN USA serves the United States through its flagship office in Houston, Texas. Houston serves as the corporate headquarters for many national and international energy companies, making it the ideal location from which to support these customers, as well as those in other industries. read on Discover more