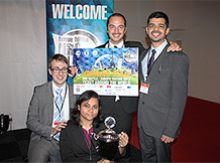 ROSEN Europe is the winner of the 2013 European NRG Battle 2013: “The jury was very impressed of the innovative character of the base load concept for offshore wind parks developed by ROSEN Europe-Team 1”, said Reinhard Osterhage, General Manager Products and Services, ROSEN Europe.

The NRG Battle is an event for talented Bachelor and Master students from 53 different nationalities, who are interested in a career in the energy sector. It is an initiative from TTA World, a company to organize competitions to bring together the best of the best for innovation and accelerating business ideas. The participating companies from the energy sector provide real life business cases, form a team of students and work together to find the most suitable and feasible solutions ranging from fossil and renewable energy to energy savings and the quality of fuels. This year ROSEN Europe participated for the second time in the European NRG Battle.

The students worked on the cases in multi-disciplinary teams consisting of five students. At the end of the day, they present their results via a ‘pitch’ presentation to a jury consisting of CEOs and directors from the energy industry. ROSEN Europe’s cases for the NRG Battle 2013:

Case 1 - “Base Load Concept for Offshore Wind Parks”
The Challenge: The team had to consider efficiency of energy storage concepts and discuss the energy transport and provision to the mainland.

Case 2 - “Water Depth Independent Offshore Wind Farm Setup”
The Challenge: The team had to look at the comparable cost efficiency as with standard water depth wind farms and to assess the energy transport to the mainland and provide a suitable solution. Furthermore a cost estimation for the set-up of such a wind park and a suitable approach for the energy storage had to be developed.

Before both teams competed in round two of the NRG Battle, a group of ROSEN experts from Regional Marketing and Human Resources together with case instructors Marc Baumeister (ROSEN Technology & Research Center) and Marten van der Rijst (ROSEN Europe) organized a meeting with the students in Oldenzaal. Here the students were given some background information about ROSEN as well as the case and its challenges. A facility tour gave deeper insights on the inspection technology provided by the ROSEN Group to the energy industry.

For more information about the NRG Battle 2013, visit the website http://www.nrgbattle.nl