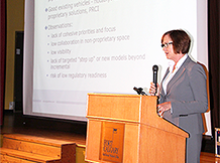 The ROSEN Group launched their new appearance in Canada on October 3rd in conjunction with the first ROSEN Innovation Summit in Calgary. Vice President Daryl Ronsky introduced the visual changes as well as the thoughts behind the new brand strategy. The summit’s agenda included presentations regarding innovation and technology from ROSEN experts hailing from three different countries as well as three guest speakers.

The topics ranged from ILI Crack Detection for Small Diameter Pipelines, Data Integration, Unpiggable Pipelines and New Innovations emerging from the ROSEN Technology and Research Centers. ROSEN also presented an in depth look at the processes and quality checks for inline inspection runs as well as introduced the new Plant & Terminal Business Segment. The ROSEN Innovation Summit was held at historic Fort Calgary, which was established in 1875 by the North West Mounted Police and laid the foundation for the city of Calgary.

As one of the guest speakers Brenda Kenny, the President of the Canadian Energy Pipeline Association (CEPA) described the process of  “Advancing Performance Through Technology” which outlined the current status of the industry and promoted a new vision of the future to be spearheaded by the Canadian Pipeline Technology Collaborative (CPTC). The collaborative is investing in innovative research, improving pipeline safety and collaboration within the Canadian industry.

In the fall of last year, ROSEN Canada signed a contract to develop, manufacture, test, run and provide analysis results with two new 42” EMAT and one 42” AFD inline-inspection tools within a 21 week time frame. These built to purpose tools were created to assess a 900km section of pipe in TransCanada’s system with the intention to convert the line from gas to oil. Bruce Dupuis, Program Manager Liquid Pipeline Integrity from TransCanada Pipelines presented “Bigger, Stronger, Faster – A Case Study of ROSEN’s Rapid Development Capability.” He discussed the aggressive project schedule, the new sensors, speed control and reduced drag design that performed beautifully in achieving run success and dig verified results.

Due to the extremely positive feedback received from our customers, the ROSEN Innovation Summit will be repeated alternately to the International Pipeline Conference (IPC).