70 Years in the Pipeline Industry

Honoring Ray Lewis with an ASME Certificate of Achievement

Ray Lewis has been sharing his wealth of knowledge, experience, and leadership in the areas of pipeline pressure testing technology, in-line inspection, and all aspects of pipeline integrity management for nearly 70 years. In recognition of his long-term contribution, including his over 20-year involvement in the ASME B31.8 code committee, Mr. Lewis was presented with the ASME Certificate of Achievement for Meritorious Service. Robert Appleby of ASME presented Mr. Lewis with the recognition on 31 January 2018, at the Pigging Pipeline Integrity Management Conference and Exhibition in Houston, TX.

As a young boy growing up during the depression near oil fields in Smackover, Arkansas, Ray Lewis had a simple goal — to end the poverty cycle and contribute to his family’s well-being. So, he began working at 15 as a derrickman in the oil fields. Being so familiar with the oil fields, a career in petroleum engineering was the natural path for him to follow. However, in 1944, Mr. Lewis made the decision to serve his country and joined the US Navy. Following his two-year service, Mr. Lewis earned a college education under the GI Bill. One summer during his studies, he was hired by Williams Pressure Service Company of Shreveport, Louisiana, and was eventually offered a permanent position upon graduation. This is how he began his extensive career in the pipeline industry.

Working in pressure testing when it was still in its infancy, Mr. Lewis became a true leader in the development of pipeline integrity management. His involvement in countless industry associations and committees, such as the American Gas Association, American Society of Mechanical Engineers, Gas Piping Technology Committee, INGAA Foundation, and Southern Gas Association, helped lay the groundwork for integrity engineering in the US. 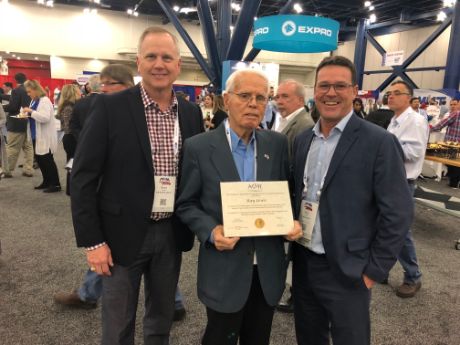 After nearly 25 years of varied industry experience, including as the editor of several industry magazines, President of Nova Services, and Vice President of Integrity Engineering for Ford, Bacon & Davis, long-time business associate Hermann Rosen chose Mr. Lewis and FB&D to introduce and represent ROSEN’s intelligent pigging services in the US market, naming him Vice President in 1987. After a brief retirement, Ray Lewis decided to return to his passion and accepted the position at ROSEN as the Director of Business Development for North America in 1996.

A patriarch for the growth and mentorship of the ROSEN family of employees, and a building block for the industry, Mr. Lewis was instrumental in paving the way for ROSEN’s success in the US market. In 2017, after a career with the ROSEN Group spanning over 20 years, Ray Lewis retired at 90 years of age.