What do cats that survive falling from high-rise buildings have to do with cognitive bias? Find out in this next part of our series, in which our author Michael Smith focuses specifically on survivorship bias and then links the phenomenon to pipelines and reaching zero incidents.

In the previous part of this series, we introduced the illusion of causality.

In this article, I was going to talk about survivorship bias. But in these strange and difficult times of lockdowns, social distancing and state approved daily exercise, there’s only one possible topic of conversation.

You guessed it, it’s co…

In 1987, the Journal of the American Veterinary Medical Association published a rather unusual article about cats falling from high rise buildings.

Cats, the authors observed, suffered fewer injuries when they fell from higher floors of the building. Cats falling from lower floors seemed to be less fortunate, with broken bones aplenty. Very counterintuitive.

One tragic (but hilarious) explanation was that cats relax once they reach terminal velocity, thereby absorbing the impact better. The unfortunate cat falling from a lower height would still be accelerating as it hit the ground, tensed up in a state of feline panic.

While this is a perfectly coherent hypothesis, the more realistic explanation proposed was survivorship bias.

Ask yourself this: Did the authors collect their data in a controlled experimental environment? Presumably not. Throwing kittens out of windows is ill advised in a civilized society.

Instead, their data came from veterinary practices, where anxious owners had brought their ailing pets for treatment after a fall.

And what linked all of the cats that were brought to the vet?

The important link is that they all survived the fall. Deceased kitties never made it to the vet and hence were omitted from the dataset. Unsurprisingly, these were the ones that fell from the greatest heights. The dataset was therefore biased, and the conclusion was faulty. 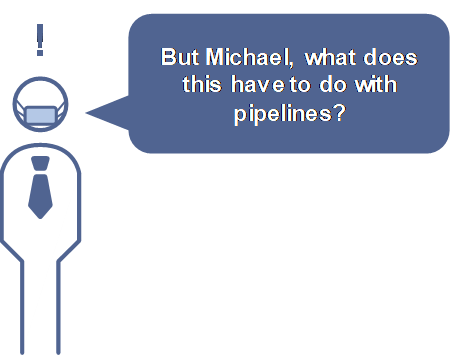 As pipeline professionals, our ultimate goal is to prevent incidents, and – much like the authors of the 1987 study – we pore over historical data in an attempt to understand why they happen. So, is there anything we can learn from the cat story?

Well, in this context, the survivorship bias would be a tendency to limit the scope of our studies to pipelines that have survived (i.e. never failed). I don’t think we can be accused of that. Indeed, a huge amount of effort goes into analyzing pipeline failures, and the resulting failure statistics are regularly used as a basis for risk assessments.

There is no evidence that we overlook failed pipelines as if they were dead cats.

But here’s some food for thought: What if we do the opposite? What if we focus too much on pipeline failures and not enough on their absence?

When learning about the causes of pipeline failures, we need to pay close attention to all pipelines, whether they be pipelines that narrowly avoided failure in the past, pipelines that are likely to fail in the future, or even pipelines that are entirely healthy. The data describing and explaining their condition is all valuable for decision support. That’s why ROSEN is developing predictive models that leverage condition data from tens of thousands of in service pipelines as well as failure statistics.

I know. You heard it here first.

Until next time, take care everyone.

Cognitive bias is a term that refers to the systematic ways in which a person’s decision-making is influenced based on the context of the information received and their own perception. In this article, Michael Smith, of the ROSEN Group, introduces this phenomenon with a special focus on our individual blind spots. read on Cognitive Biases

Cognitive bias is a term that refers to the systematic ways in which a person’s decision-making is influenced based on the context of the information received and their own perception. In this article, Michael Smith, of the ROSEN Group, introduces the next installment of our cognitive biases series. This time, he focuses on confirmation bias: can you put your beliefs aside and be unbiased? read on Cognitive Biases Part 2

In this third part of our Cognitive Bias series, Michael Smith introduces the illusion of causality bias and how it relates to Aaron Ramsey and celebrity deaths as well as to pipeline integrity management. read on Cognitive Biases Part 3