Identifying Internal Corrosion From the Outside

Managing the threat of corrosion in pipelines is a critical task for the entire integrity management of pipeline assets. In order to manage this threat, it is vital to gather high-resolution data on pipelines in order to be able to make the best decisions for safe and efficient operation – as was the case for the above ground loading lines in Argentina.

In the past, the operator used a long-range guided wave technology to gather data on the presence of corrosion but was unable to obtain reliable data. The technology was unable to detect the anomalies of the pipeline because of its lower resolution. As ROSEN was approached with this challenge, experts first took a moment to understand the asset itself and the conditions it was under to identify the best approach for any metal loss detection. Not only did the objective of identifying any corrosion need to be considered, so did the design of the pipeline itself. These loading lines had to be inspected from the outside, as they did not have either launching or receiving facilities. The solution was found in the electromagnetic acoustic transducer (EMAT) technology, capable of obtaining data in high temperatures and on coated surfaces and of finding hidden corrosion. For the external inspection of the pipeline, this technology was transported using in-field service equipment (IFSE).

IFSE is a set of manually operated devices ideal for inspecting above-ground piping from the outside while still gaining integrity data of the interior and exterior of the pipe wall. It is also used to inspect piping at supports where localized corrosion can occur on the exterior of the pipe underneath coating or paint, causing the location to slightly bulge. The equipment has two different setups: circumferentially orientated (CIRC) and axial orientated (AXUS). It uses the EMAT technology by introducing a soundwave into the pipe wall. The technology provides many different wave modes to inspect a structure, each with unique characteristics with their own specific application for optimal feature detection. The circumferential inspection is performed rather quickly as the CIRC tool travels along the entire length of the pipe, sending the EMAT signal through the entire circumference of the line. The AXUS tool follows, visualizing any anomaly by sending a high-frequency wave in an axial direction in search of an echo from the feature itself. The AXUS tool is directed around the circumference of the pipe to provide a complete image. These technologies are ideal for detecting the most natural occurring feature – corrosion. The CIRC tool provides an axial profile of the corrosion, and the AXUS tool adds the circumferential extent of corrosion as well as some axial distance information. Combining both techniques determines the integrity status of the pipe body and possible corrosion under external pipe supports. 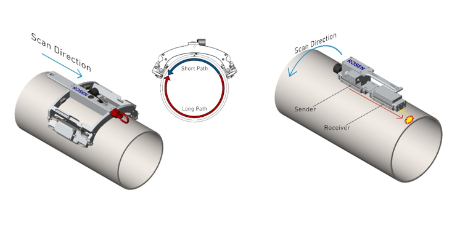 Figure 1: CIRC (left) and AXUS (right) are ideal for the entire inspection of the pipe body, including at supports and hangers.

As is so often the case, not only must the technology and system selection be carefully considered, the operation of the inspection must be planned, too. In order to minimize execution time, two operators handled the equipment. The first conducted the inspection with the in-field service equipment, and the second followed with phased array corrosion mapping UT equipment. This allowed for instant verification of any anomalies as they were detected. In other words, a tandem inspection took place: rather than wait for one to be completed, they took place simultaneously, allowing for a fast and high-quality inspection. After the inspection was carried out and the data was assessed, the operator was able to use the high-quality feature reporting, as it revealed anomalies that showed traces of corrosion. These results facilitated a better and cohesive management plan of the asset’s integrity and evidenced the need to address pipeline threats using the right technology.