In service, assets must work under high pressure and are exposed to cyclic loading throughout their operational life, which causes fatigue damage to components and defects. Understanding the amount of fatigue damage accrued over time is critical in identifying when remedial action should be taken. Different techniques can be used to calculate the impact of fatigue. In this article, our experts Rhett Dotson and Fernando Curiel discuss why it is important to fully understand the number and magnitude of the pressure cycles. In doing so, they explain how to address criticisms of using benchmark pressure cycles with industry-accepted methodologies.

A primary step in any pipeline fatigue analysis is to understand the severity of the pipeline operations. Whether the fatigue analysis is addressing cracks or dents, it is necessary to understand both the number and the magnitude of the pressure cycles. Typically, operators condense historical operating pressures into a pressure histogram that provides a tabular list describing the magnitude of each pressure cycle (i.e. range) and the number of cycles. The most common method for generating a pressure histogram from operating pressure is a rainflow analysis [1]. Once this step is complete, many operators still desire to understand how their operations compare to other lines in similar service.

Many operators have found it useful to compare their pressure histograms to the benchmark pressure histograms produced by John Kiefner [2]. In 2004, these benchmark pressure cycles were reproduced in Technical Task Order Number 5 (TTO 5) [3], and they are more commonly associated with that document. These histograms are presented in Table 1. In TTO 5, the pressure range was presented as a single value at the highest pressure in the range rather than the ranges shown in Table 1. This is important because if smaller cycles with a range of less than 20% specified minimum yield strength (SMYS) are included, it can make the lower pressure ranges appear more significant.

There have been a number of criticisms made with regards to the benchmark pressure cycles presented in Table 1. First and foremost, many operators and consultants have struggled with how to compare actual histograms to the reference histograms. Even TTO 5 [3] reflects this position when it states, “Direct comparison of the actual cycles for a given pipeline to the cycles in the four benchmark categories is very difficult.” This article will illustrate that this criticism can be addressed with industry-accepted methodologies.

The second criticism levied against the benchmark cycles is that they are referenced to the yield strength of the pipeline. As a result, two pipelines that are identical in terms of operations, diameter and wall thickness could be classified differently if they are constructed from different materials. This argument has some merit, as the fatigue response of mild steel materials is largely independent of grade. The original source document [2] for the benchmark cycles seems to acknowledge this in the footnotes when it states, “These results apply to a 16-inch OD by 0.250-inch w.t. X52 pipeline for a particular set of crack-growth parameters.” However, it should be noted that this criticism is of greater concern if the pressure cycles are used to influence integrity management decisions, such as when trying to determine whether a given system has seam weld susceptibility according to TTO 5, or when attempting to compare the relative severity of two different pipelines of different grades. When the document is used to provide a relative understanding of a pipeline’s operational conditions, as is the focus of this article, this objection is less concerning.

Before examining either one of these criticisms, it is necessary to discuss the appropriate method for comparing the benchmark pressure cycles. The original source document [2] discusses the solution in the same footnote mentioned above when it states, “The operator who wishes to assess a given spectrum using these example ranges might consider its equivalence to one of these spectra by means of Miner’s Rule.” Miner’s Rule provides a convenient means for condensing pressure cycles from a given histogram into an equivalent number of cycles at a given pressure. The relationship is shown in the equation below, where P1 through PN are the pressure ranges from the given spectra, and N1 to NN are the corresponding numbers of cycles for each of the pressure ranges. Pequiv is the equivalent pressure range, and Nequiv is the number of cycles at the equivalent pressure range. The lower-case n is the fatigue exponent that will be used in the analysis.

The above relationship can be used to condense the histogram to the number of equivalent annual cycles with a range of 72% SMYS for any pipeline. The results of the condensed rainflow histograms are shown in Table 2. It is worth noting that the choice of fatigue exponent used for condensing the histograms will impact the results, and the results are shown for two fatigue exponents, n = 3 and 4. When condensing cycles, the fatigue exponent should be chosen to match the exponent used in the analysis. This condensed histogram is useful for several reasons. First, the cyclic categories can be directly compared to each other by comparing the number of equivalent cycles in each category. This comparison shows that the progression between categories is not linear. Instead, the “very aggressive” category is twice as severe as the “aggressive” category, while the aggressive category is over five times more severe than the “moderate” one. In turn, the “moderate” category is only about 50% more severe than the “light” category. The condensed spectrum in Table 2 can also be understood in physical terms. The “very aggressive” category represents a pipeline that is cycled from 0-72% SMYS at least 242 times a year, or twice every three days. Similarly, an aggressive pipeline is one that is cycled form 0-72% SMYS once every three days.

The use of Miner’s Rule to compare pressure history is also shown with two physical data sets, which are shown graphically in Figure 1. For simplicity, both data sets are assumed to come from pipelines constructed with 16-inch OD by 0.250-inch w.t. X52 material. A visual review shows that while the first pressure history data set generally operates at a higher pressure, it has far less variability when compared to the second pressure history. The histogram for each of the pressure histories using the bins from the benchmark pressure cycles is presented in Table 3. Some notable observations are present. First, a significant number of pressure cycles are less than 20% SMYS. If these cycles are included in the 20-25% SMYS category, they will make that category seem far more severe. Second, if the number of cycles for each pressure range were compared directly to Table 2, some erroneous conclusions could be drawn. For instance, History 1 could be classified as “moderate” based on a single cycle with a range of 55-65% SMYS. Likewise, History 2 could be classified as “aggressive” based on the number of cycles with a range of 55-65% SMYS (nine total). Both of these classifications would be even further exaggerated if the number of cycles with a pressure range of less than 20% SMYS was grouped into the lowest bin and compared to the benchmark cycles. All of these conclusions are incorrect with respect to the cycling severity of each pressure history. 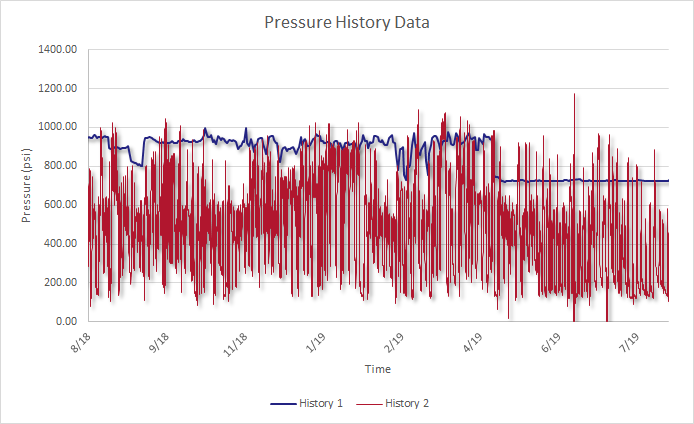 When the pressure history data is condensed to the equivalent number of cycles at 72% SMYS with a fatigue exponent of 3, the comparisons become much clearer, as shown in Table 4. The number of equivalent pressure cycles is shown for two different sets of binning, the difference being the refinement of pressure ranges. The first row presents the number of equivalent 72% SMYS cycles when only the seven bins used to describe the benchmark cycles are considered. The second row presents the number of equivalent 72% SMYS cycles when bins are created in increments of 2 psi. This produces substantially more bins but a much more refined and accurate estimate of pressure cycling severity. It should be noted that using fewer bins will always produce a larger number of equivalent cycles, but sometimes this will be excessively conservative. In the case of History 1, the equivalent cycles demonstrate that the pressure history is an order of magnitude lower than the “light” pressure history curve. This classification agrees with the visual observations that the line has little to no pressure cycling. History 2 can clearly be seen to fit between moderate and aggressive. A direct comparison of History 2 shows that it is two orders of magnitude more severe than History 1.

It is worth discussing the fact that the comparison used above assumed the pipeline material was consistent with the original by 0.250-inch w.t. X52 pipeline material from [2]. What if Pressure History 2 came from a material with a grade of X65? Strictly speaking, the pressure cycling does not care what the grade of the material is; therefore, the calculations should not show one grade to be more severe than another. However, if we compare the number of 72% cycles, the calculations will show a difference. In these cases, it is necessary to compare to a fixed pressure range rather than one based on a percentage of the SMYS. In the case of X52 material, 1,170 psi represents a hoop stress of 72% SMYS. For the X65 material, 1,462.5 psi corresponds to a hoop stress of 72% SMYS. If the two data sets are to be compared, they cannot be compared at 72% SMYS, since this value is different for both pipelines. It also must be understood that the benchmark cycles will inherently be more severe for higher grades of pipeline material, as the calculated ranges will be larger. However, given that pipelines are typically designed and operated as a fraction of the material yield strength, the benchmark pressure cycles should be understood as relative to a given grade rather than a uniform comparison across pipeline grades.

Another possible way of selecting the pressure range that will be used for comparison purposes is to use a consistent hoop stress rather than a consistent percentage of SMYS. Two identical features in joints with the same dimensions and applied pressure should exhibit the same fatigue response independent of the grade used. Selecting a fixed nominal hoop stress for comparison purposes would essentially non-dimensionalize the problem in terms of the SMYS, outer diameter and wall thickness used, providing a more representative comparison of the fatigue response due to pressure cycling. The choice of a nominal hoop stress is not important as long as it is consistent. A common choice in the industry is related to the Severity Spectrum Indicator (SSI), which uses a nominal hoop stress of 13 ksi to compare cycling severity [4].

There has been significant confusion in the industry around the use and understanding of the benchmark pressure cycles presented by Kiefner. However, this article has shown that the amount of effort to condense the pressure cycles and provide an appropriate comparison is minimal using Miner’s Rule. When performing the comparison, it is nevertheless important to recognize that the size of the histogram bins is significant. In addition, an experienced engineer must recognize the variation in the cycling with respect to pipeline materials. Despite these limitations, the benchmark cycles have remained a useful point of comparison for many operators when used appropriately.