In order to minimize the impact on operations, the timeframe for an inspection can sometimes be very limited. Combine that with limited space around the manifold due to platform maintenance and a potential influence on positioning due to underwater currents and you will find yourself in a situation that requires a new approach. In this case, the operator was looking for an in-line inspection to collect data on internal wall thickness of the pipeline and to get a visual inspection on the manifold condition. For this, KTN – a company of the ROSEN Group – carried out an internal ultrasound inspection using a pushrod system in combination with a Remotely Operated Underwater Vehicle (ROV). This case study was previously published in the PPSA Newsletter.

A semi-submersible integrated production, drilling and quarters (PDQ) platform located in the Norwegian North Sea was undergoing planned maintenance, which included the replacement of a “Christmas Tree.” During this scheduled shutdown, the operator also wanted to perform an in-line inspection (ILI) of one of the manifolds located under the platform. The goal of the ILI was to record data on the internal pipe wall thickness and obtain a visual inspection on the manifold condition. Due to the maintenance work and potential conflicts with planned drilling, the ILI needed to take place within a short time window to minimize the impact on operations.

The outer diameter of the manifold to be inspected is 141.3 mm with a wall thickness of 12.7 mm. Simulations of the pipe located the most critical area of corrosion to be approximately 1.5 meters into the manifold, just after the third 1.5D/90° bend; therefore, this section was determined to be the most distant point in need of inspection. Previous internal video inspection attempts of a neighboring manifold revealed a potential additional challenge of excessive weld roots, which made negotiation of that manifold impossible for the other service provider at that time. Figure 1 - Mock-up of the manifold

KTN, a company of the ROSEN Group, was called on to find an ILI solution for this so-called “unpiggable” pipeline. A mock-up of the manifold was utilized during the development and testing process of the solution (Figure 1). Sharp edges were added to the test manifold to represent the expected weld roots. One of these edges can be seen in Figure 2.

The initial proposal was to use a standard 10’’ crawler in a launcher with a reducer to fit into the 5’’ spool. The idea was to use a 5’’ sensor carrier with fixed probes, which would be propelled by a crawler module. This would be considered a standard KTN operation, using an umbilical winch located on the deck of the platform with the tether hanging 340 meters down to the seabed. However, due to the ongoing platform maintenance, the limited space around the manifold and additional concerns the operator had about underwater currents potentially influencing the umbilical position, another approach had to be considered.

Through close collaboration between the operator and the tethered solution specialists at KTN, a new approach was conceived. This solution was unique in that the tool would be controlled by a Remotely Operated Underwater Vehicle (ROV) instead of a crawler; to enable the pushing and pulling of the tool through the pipeline by the ROV’s manipulator arm, a pushrod was designed. Additionally, subsea cables were manufactured to run between the tool and available interfaces of the ROV to support power, video and Ethernet capabilities.

Using a pushrod in combination with an ROV was a new concept to most of the on-site personnel; therefore, during the testing period, modifications and improvements were made to optimize performance. One of the challenges with a pushrod system is to get enough force when pushing the tool forward, particularly in back-to-back bends or when there are restrictions like excessive weld roots, tees or deposits that the tool must negotiate. Therefore, a traditional flat push rod made of steel was selected due to its compatibility with the claw of the ROV arm, and centralizers with wheels were mounted to help optimize push/pull force efficiency and prevent the push rod from bending under pressure.

The launching concept itself also needed special considerations. A cap was designed to interface the temporarily open launcher on the front end. On the back end, an odometer arrangement was designed and mounted on the flat pushrod, enabling precise tracking of the tool’s progression through the manifold. During subsea transport, the tool was secured in the launcher via a tailor-made security handle for the ROV. Details of the final solution can be seen in Figure 3. 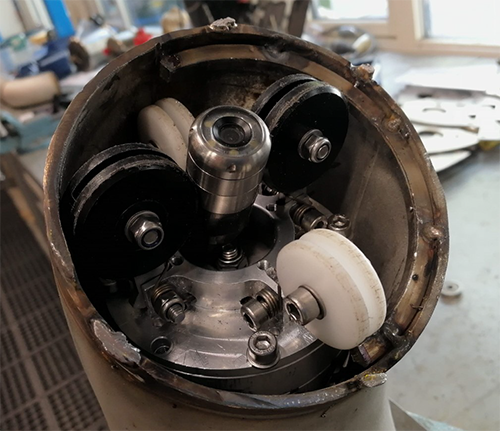 32 pulse echo probes were mounted on a probe ring in the front module of the ultrasonic ILI tool. A camera was also embedded into the probe ring and connected to a separate pressure vessel, which contained electronics connecting to the ROV. Two cables were used to connect the complete tool to the ROV. The main components of the inspection tool can be seen in Figure 4. 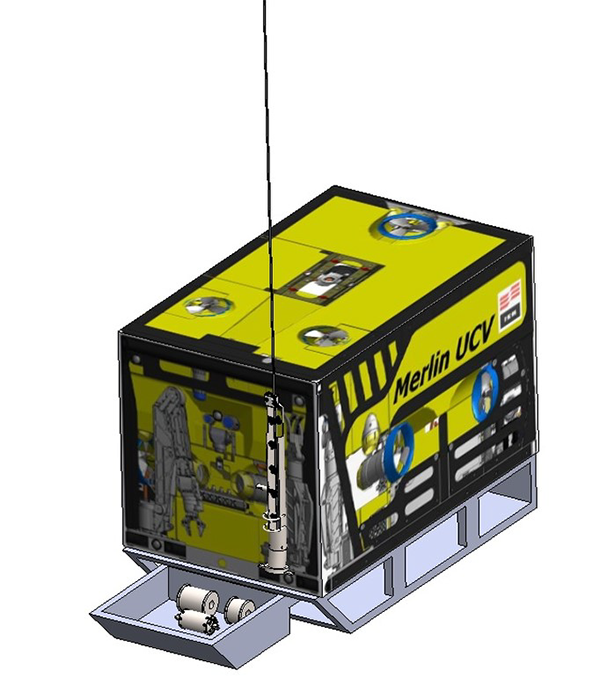 Figure 5 - The ROV with the inspection tool parts secured

There were several steps that needed to take place before the tool could be launched. First, the ROV had to remove the blind flange of the manifold and then mount the cap to prepare for the installation. The tool was then electrically connected to the ROV and placed into the basket under the ROV while on deck (Figure 5). The ROV travelled with the launcher down to the seabed and mounted it to the adapter. Finally, the ROV operator carefully pushed the tool into the pipeline via the push rod. As shown in Figure 6 and Figure 7, the operating space for the ROV was limited. As the ROV claw could easily damage the cables, the ROV operator had to proceed with extreme caution.

After the inbound inspection, the tool was pulled back slowly towards the launcher in small increments, as the arm had to be carefully repositioned several times. During this return run, the UT sensors captured the wall thickness data and sent it in real time over the ROV’s umbilical to the topside on-site analysts. During the job execution, the project team could follow the real-time progress of the subsea operation by logging onto a website that supported a live video stream of the ROV’s cameras.

Close collaboration was key to the success of this challenging in-line inspection. Thanks to the experienced personnel from the ROV company, the operator and the KTN experts, risks were already minimized during the preparation phase, and the inspection solution could be applied with confidence. The innovative inspection solution was applied within the specified timeframe, during previously scheduled maintenance and with minimal impact on operations. Through this project, the operator obtained high-resolution data on the wall thickness of the manifold and a visual inspection record. This information was made immediately available to the operator in an initial report on-site, then followed up by a thorough final report. This data enabled the operator to make confident decisions on the next steps in the integrity management of this asset.

SOLUTIONS. BECAUSE WE CAN. Challenging Pipeline Diagnostics