ROSEN Norway (formerly KTN AS) is a technology company specialized in self-propelled tethered tool inspection technology for challenging pipelines – pipelines that were not designed to be pigged with conventional in-line inspection (ILI) tools. Different types of technologies, including ultrasonic wall thickness and crack measurement, as well as different types of propulsion elements are available for these specialized ILI tools. This article describes the unique ability of a system to navigate the complex pipeline geometry of a 10" offshore oil riser. During this inspection, the tethered tool safely negotiated a total accumulated bend angle of 1,188° (17 bends) while successfully inspecting the pipeline for wall thickness and cracks.

Figures 1, 2 and 3 show a “typical” challenging pipeline – a riser from platform to subsea that makes the use of a conventional tool extremely expensive, complex and risky, because the receiver would need to be fabricated and installed subsea. Thus, the pipeline inspection would have to be conducted with the assistance of a diving support vessel. However, it is much easier – and less risky – to employ a tethered self-propelled bidirectional ultrasonic tool able to perform geometry, wall thickness and crack inspections in a single run. This tool can be launched and received from a trap installed on the platform, making it the right choice for this project. 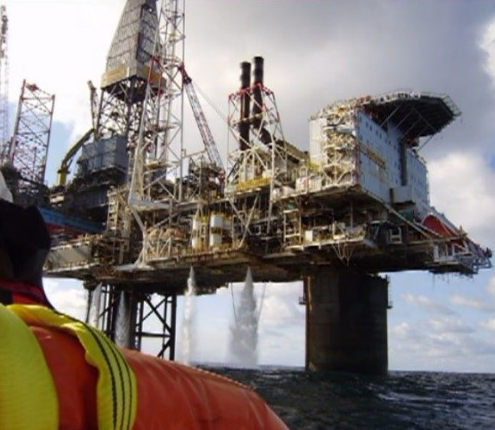 Figure 2: Sketch of platform with riser 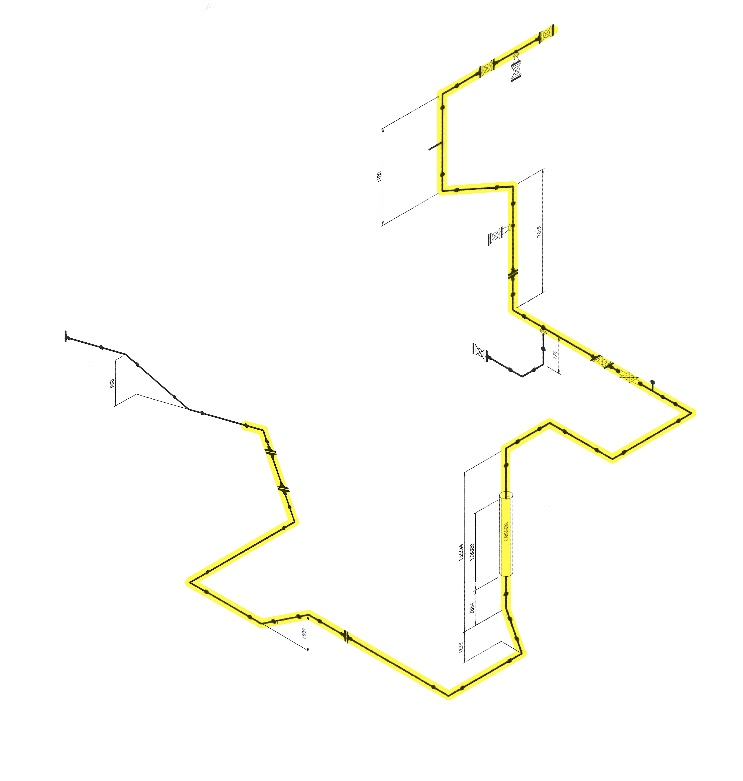 The decision to inspect this particular unpiggable pipeline was made after a risk assessment of this particular network. After the assessment, it was categorized as high risk and critical for the operation. Therefore, an inspection solution needed to be developed. Initially, the operator was open to different vendors and solutions, but only the tethered self-propelled bidirectional approach was chosen for further validation.

Of course, no unpiggable pipeline is “typical;” the unique challenge with this pipeline was the number of bends and especially the total angle. Imaging how hard you would have to pull – the required force – to pull a garden hose through a combination of bends. You will notice that every additional bend adds friction, and you have to pull harder. The same goes for the tether on an inspection tool. Therefore, the number and angle of bends are the limiting factors most of the time. In this case, the pulling force for the tractors – and especially the pullback forces for the winch for the return – were extreme and had never been applied before.

During the initial discussions, the goal was to inspect a section of nearly 200 m, including up to 11 90° bends, as well as 2 2.4° vertical miter bends. ROSEN’s UT bidirectional self-propelled tethered inspection unit specifically addresses the challenges of single access and limited pumping abilities, as well as pipelines with complex geometries. The tethered robotic crawler and UT sensor carrier come together to allow the unit to travel both forward and backward through bends, consistently showing valuable high-resolution data in real time to the operator. The bidirectional capability is achieved through adapting the sensor carrier, electronics and data-storage modules into lightweight low-friction modules on wheels and combining them with a powerful wheel-driven crawler. The tether supplies electrical power to the tool, transmits the collected data to the control unit at the launching site, enables remote steering of the crawler and acts as a means for recovery in emergencies.

Additionally, to address the necessary wall measurement inspection and crack detection inspections, 2 technologies were applied in this solution. The first was ultrasound wall measurement (UTWM) technology. Second, time-of-flight-diffraction UT technology (TUM-TOFD) is used to quantitatively measure crack depth. This technology works by sending a wideband ultrasonic impulse in a “pitch-and-catch” arrangement and then measuring the difference in the diffraction signals returning from the crack-like features. Using his method, crack depth and location are quantitatively measured.

For this riser inspection, the main issue was the pullback force of the tool. In this solution, the inspection system were propelled through the line by the 10” self-propelled tractor units. With a pulling force of approximately 200 kg each, they were not subject to the limiting factor for the inspection of this riser. Yes, the solution proposed was self-propelled, but if the tractor tool were to lose power, the tool would need to be pulled back via the winch, which may struggle to provide the power needed.

The solution, in theory, would mainly require multiple self-propelled crawler units, an ultrasound wall measurement sensor unit, a time-of-flight diffraction (TOFD) sensor unit for crack detection, and further electronic and storage units. See Figure 4 below for a visual of the full tool train.

Figure 4: Tool train with all necessary elements for inspection

In order to confirm that the passage and retrieval through 11 90° bends was feasible, a tool was developed and tested successfully on a test loop in our facility in Bergen, Norway. The main purpose of the tests was to demonstrate that the tool could be retrieved by the tether, i.e. a winch. Based on the friction profile from the test loop (the pullback forces as a function of the tool position in the loop), we were able to correlate the figures with the riser configuration, allowing us to obtain a figure for the required pullback forces in case the tool lost power within the riser system. 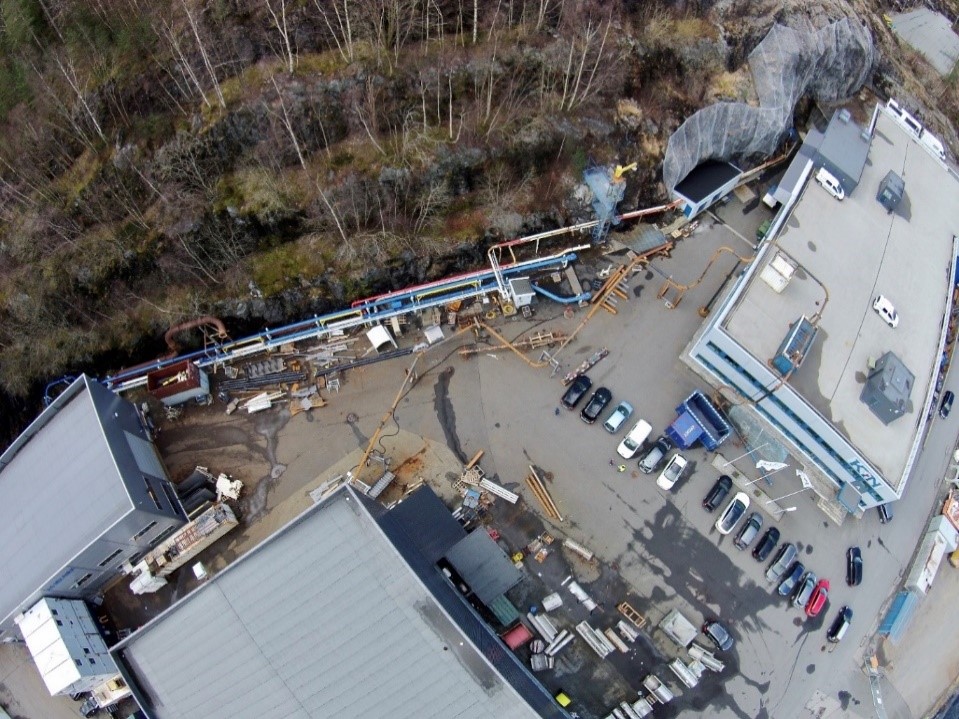 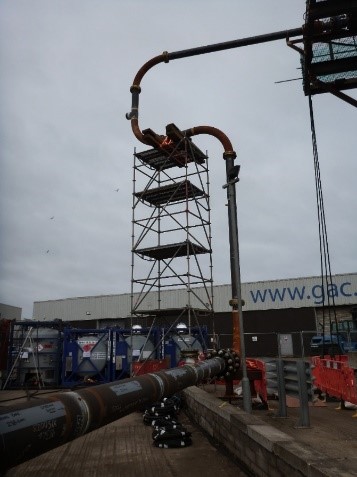 OFF TO DO THE WORK

Once satisfied with the testing, the equipment and team were mobilized, and a temporary trap was installed on the platform with a stuffing box (cable penetration), as were guide wheels for routing the cable. Further, the winch was placed, the computer equipment was positioned in an on-site control room, and the function tests were completed. 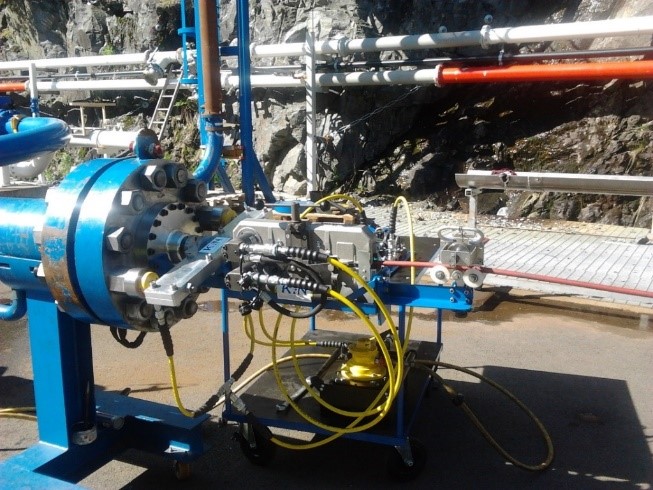 Two electrical crawlers were run in a tandem configuration to ensure the tool could negotiate difficult installations such as slippery valves, T’s, etc. An ultrasonic sensor carrier with 160 UT probes was used along with 2 odometers measuring the distance traveled and the tool velocity. The movement of the odometers triggers the data collection. Therefore, if the tool train stands still, data is not collected. However, the inspection can be carried out with only 1 odometer working.

The second tool was a purpose-made scanner equipped with TOFD probes used to scan any features. Straight-beam pulse echo (PE) probes were installed to position the scanner correctly against girth welds to be assessed. When deploying TOFD sensors at corroded features in parent material, the tethered ultrasonic measurement tool position is used to determine the correct positioning of the TOFD tool.

Click here to see an animation illustrating how a typical tethered TOFD inspection is performed. Finally, the pipeline was shut down, and the tool made its way into the pipeline for approximately 300 m, collecting wall thickness data on the forward and return run. After that, the tool was modified from a UTWM to a TOFD configuration, tested and launched again.

During the run, many pull and pullback force measurements were done at preselected distances in order to calculate the friction coefficient of the riser and to ensure a return, even in the worst-case scenario. Furthermore, during testing and the actual inspection activities, 2 operators were on deck operating the winch, tool train, tether, etc. Another 2 operators managed the computers for propulsion and UT in the control room. Finally, during the second run, the tool stopped in the splash zone area and did full circumferential TOFD scans along with some scans of preselected girth welds and any areas that were conspicuous in the wall thickness data of the first run. 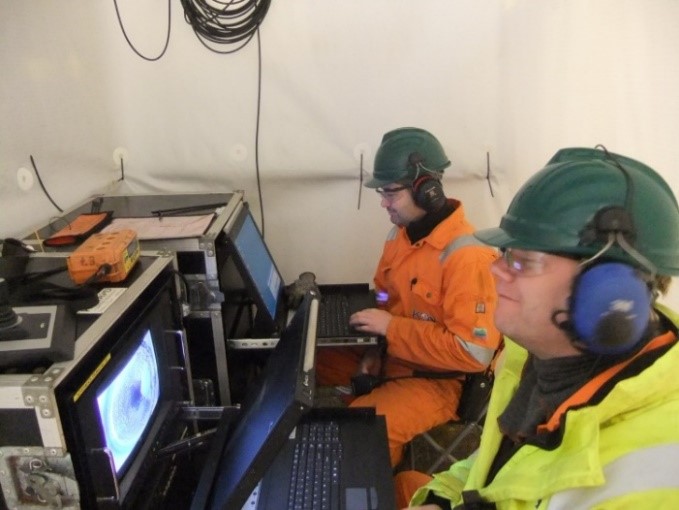 After presenting a site report, which typically shows the most severe defects detected, the equipment and the team were demobilized, and the detailed analysis was started from home. The data evaluation team now had 4 data sets for wall thickness (2 forward and 2 return runs) and 2 data sets from the TOFD crack analysis. The full length and circumference of the targeted pipe section was successfully inspected, and the collected data was of very good quality, meeting the required specifications.

As a result of a risk assessment of several offshore unpiggable pipelines, the riser had been categorized as “high risk” for operation. Therefore, an inspection solution needed to be developed. The main challenge was to overcome the extensive number of bends. Thorough testing (especially crawler testing) in a test loop with a similar bend configuration was performed prior to the first inspection in order to demonstrate that the tool could be retrieved through such a large number of 90° elbows.

The successful inspection was repeated a few years later with a longer inspection distance and more bends to pass (setting a record of 1,188° in total).

The benefits of the tethered solution include:

Highly accurate UT and TOFD data allowed for a fitness-for-purpose evaluation, specific decision-making and the continued safe operation of the riser.

ROSEN Norway offers a portfolio of tethered ILI solutions for the inspection of so-called unpiggable pipelines. read on Learn More