Why do we need standards? They play a key role in keeping us safe. There are standards for almost everything – machines, cars, technical and medical equipment – and, of course, there are standards for pipelines. That is because safely transporting energy products through pipelines is the key to the success of the oil and gas industry. Therefore, international standards agencies, such as the American Society of Mechanical Engineers (ASME), issue relevant standards that regulate the design, operation, maintenance and integrity management of pipelines. These standards are routinely revised and amended in line with the latest industry research and guidance. ASME B31.8 was revised in late 2018. In this context, Krystin Cousart and Chris Holliday from ROSEN Canada analyze how the recent changes to ASME B31.8, specifically the revision of the equations for dent strain assessment, result in an increase in strain results. They also explore the impact this may have on the Canadian Standards Association (CSA) screening criteria used by Canadian operators.

November 2018, the American Society of Mechanical Engineers (ASME) revised the equations given in the non-mandatory Appendix R, which is used to calculate equivalent strain on the internal and external pipe surfaces [1]. This study explores the impact of this change and the conservatism within the available screening criteria, such as the depth-based and sharpness clauses given in Section 10 of CSA Z662-19.

Section 10.10.4.2 of CSA Z662-19 [2] provides the wider industry with a number of screening criteria for the identification of deformations that require further investigation, assessment or remediation. Three of the criteria are dependent on reported dent dimensions and are reproduced verbatim here:

The following dents are considered as defects unless determined by an engineering assessment to be acceptable:

b) Dents that are located on the pipe body and exceed a depth of 6 mm in pipe 101.6 mm OD or smaller or 6% of the outside diameter in pipe larger than 101.6 mm OD, unless their measured curvature strain is less than 6%;

c) Dents with a length to depth ratio (L/d) less than 20, unless their measured curvature strain is less than 6%

A depth-based screening is straightforward to apply to a large number of reported dents, but it does not account for the sharpness of a given dent. Clause 10.10.10.4.2.c) addresses this aspect.

WHAT FAILURE MODE ARE WE SCREENING FOR?

The widely accepted depth-based criteria screen for failure pressure, i.e. failure under static loading. They are empirical models based on a range of full-scale test data. The test data indicates that the smallest plain dent to cause a reduction in the failure pressure of a pipe was 20% Outer Diameter (OD) [3]. A limit of 10% OD was proposed for unrestrained plain dents measured at zero pressure or restrained dents measured at pressure (this, in essence, is a factor of safety of 2 and provides an allowance for the passage of in-line inspection tools). When measured at pressure, a limit of 7% OD was proposed for plain, unrestrained dents and adopted by standards such as API 579. Both ASME B31.8 and CSA Z662 adopted a marginally more conservative depth limit of 6% OD.

The reduction of a pipe’s failure pressure is affected to a greater extent by the presence of cracking on a dent. Cracking can initiate due to fatigue cycling or as a result of the dent formation process, i.e. the pipe material exceeds its strain tolerance and cracking occurs.

A static curvature strain-based assessment can be used to determine the likelihood for a crack to have initiated during dent formation. The industry-accepted equations for calculating curvature strain are dependent on the dent radius of curvature. The smaller the radius of curvature, i.e. if the dent is sharper, the higher the associated strain. The CSA L/d criteria can be rapidly applied to a large number of deformations based on reported dimensions and are a useful screening criterion for the “sharpness” of a dent.

If the L/d or depth-based criteria are exceeded, then both CSA Z662 and ASME B31.8 allow for a curvature strain assessment to be performed to demonstrate the acceptability – or otherwise, – of a dent.

CSA Z662-19 provides a curvature strain limit for both plain dents and dents associated with a weld. The limit is given as 6% and 4%, respectively.

Both of these limits originate from the ASME B31.8 standard. IPC2002-27122 [4] describes the task group’s selection of an appropriate strain-based limit for dents. Earlier versions of ASME B31.8 permitted field bends that impart a cold strain in the pipe wall up to 3%. Empirical results showed that the likelihood of puncture and cracking appear to increase where material strain exceeds about 12%. The task group settled on a 6% limit in the pipe body as a threshold. This is, in principle, a factor of safety of 2 on the strain at which fracture may be more likely, i.e. 12%.

These limits have been elaborated in the 2018 version of ASME B31.8. ASME now states that:

d) Plain dents are defined as injurious if they exceed a depth of 6% of the nominal pipe diameter. Upon further analysis, plain dents of any depth are acceptable and are not considered injurious provided strain levels associated with the deformation do not exceed the following strain limits:

Strain levels may be calculated in accordance with non-mandatory Appendix R or other engineering methodology.

A number of changes were made to the equations given in this appendix between the 2016 and 2018 versions of ASME B31.8.

The equations are compared below, with eliminations marked in red and additions in green.

Compared to the updated ASME B31.8-18 equations: 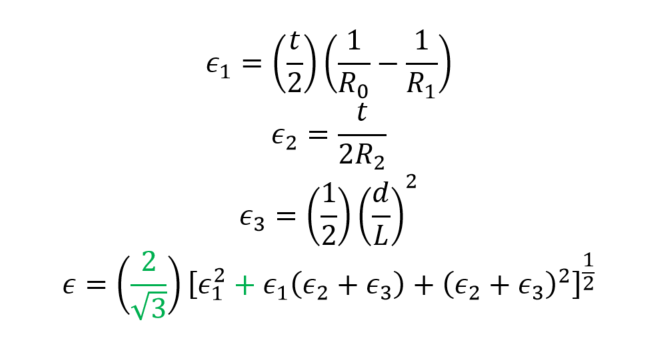 Where in both versions of the equation:

The positive and negative values for ε1 and ε2 must be carried through to determine the combined strain on the internal and external pipe surfaces.

It was concluded that the combined strain equation used in ASME B31.8-2016, and prior, considers incorrect plain strain assumptions; therefore, their use can lead to inaccurate results. A more appropriate expression for the equivalent strain was obtained by considering the hypothesis that the strains at the dent region are mainly in the plastic range, where the incompressibility condition may be applied.

and a sign change in the central term, as seen above.

These equations are further compared in the following section. Other published methodologies for calculating curvature strain are available; however, this investigation has only considered the 2016 and 2018 forms of the equations given in ASME B31.8 Appendix R.

After comparing the strain results, it is evident that the 2018 equations provide higher strains consistent with the findings of the previous studies. In addition, it can be seen that overall, as the L/d decreases (i.e. dents become sharper), the absolute difference in strain results between 2016 and 2018 increases. This is presented in Figure 1. A review was conducted, and there is no clear relationship between percent difference (2016 vs. 2018 strain results) and length to depth ratio (L/d). 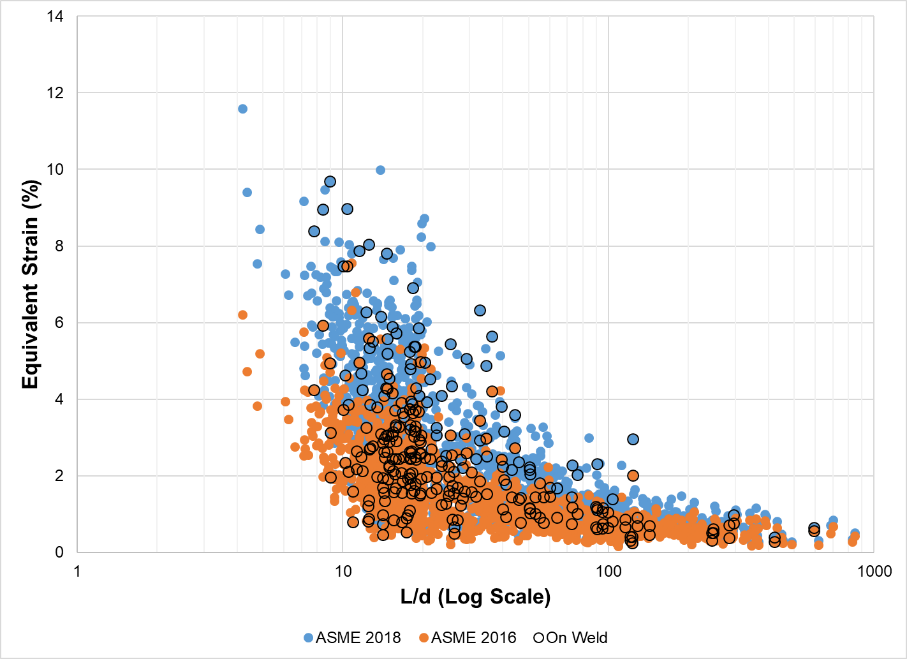 From Figure 2, it can be seen that the maximum difference between the 2018 strain results is roughly two times that of the 2016 strain results, whereas, in some instances for very low strain values, the 2018 and 2016 results are virtually equivalent. On average (mean), a 1.7-times change between the results of the two strain equations was observed. The median change between 2016 and 2018 was approximately 1.8 times.

As strain is accepted as the more accurate screening approach for a dent’s susceptibility to cracking during formation, an opportunity arises to compare calculated strain to the 1) depth-based and 2) sharpness-screening criteria given in CSA Z662 and to provide comments.

When reviewing all 1,485 dents, it can be observed that in a number of cases, dents with acceptable depths, i.e. less than 6% OD (or less than 2% if associated with a weld), are associated with an equivalent strain that exceeds the respective 6% or 4% strain limit. 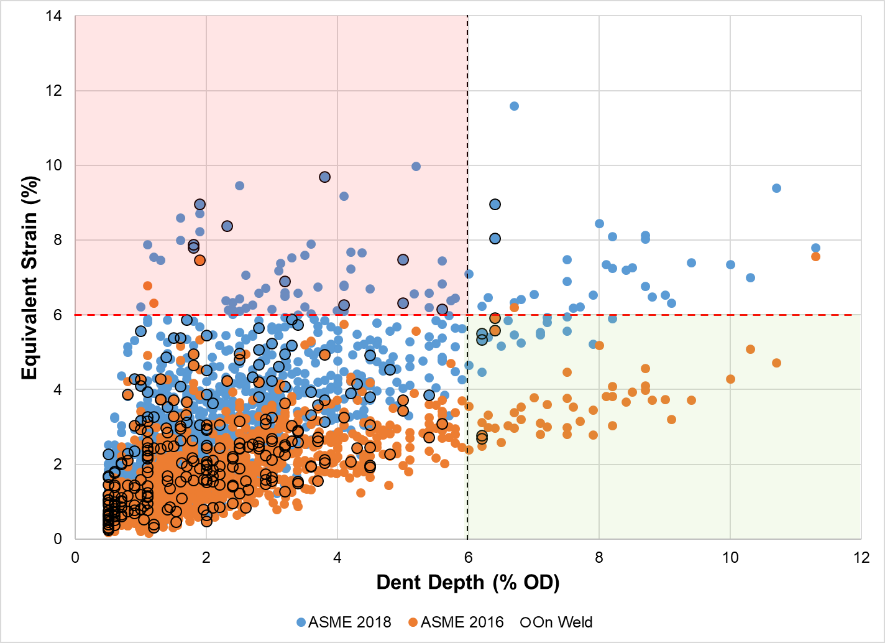 It is observed from Figure 3 that 0.2% of the plain dents when assessed using the 2016 equation and 4% when using the 2018 equation exceed the respective strain-based limit, even when the dent depth is acceptable according to the CSA screening criteria, 6% OD.

It is observed that 6% of the dents associated with welds when assessed using the 2016 equation and 17% when using the 2018 equation exceed the respective strain-based limit of 4%, even when the dent depth is acceptable according to the CSA screening criteria, 6 mm or 2% OD.

This suggests that the depth-based screening limits are not always conservative. However, it is likely that these are sharper dents and may be “caught” by the L/d criteria. 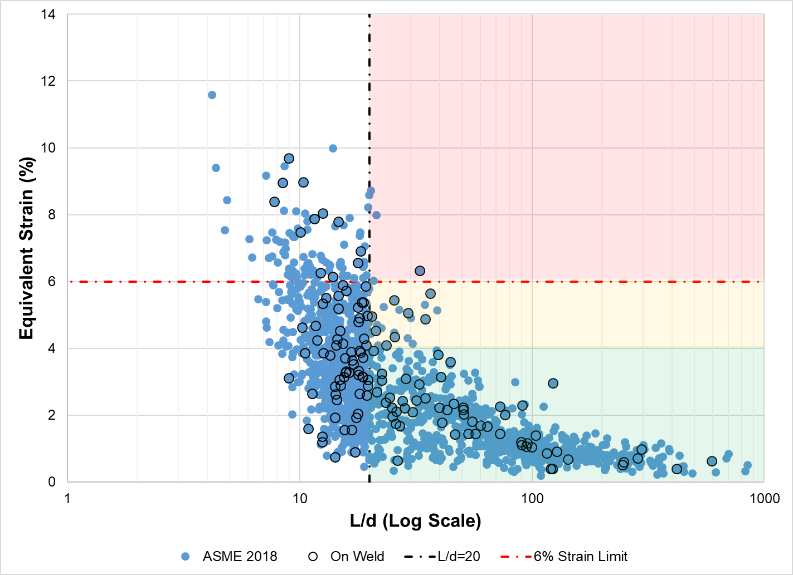 The above data suggests that an L/d screening criterion of 20 may be non-conservative in some cases for screening purposes and that the industry should review a larger data set to identify a more appropriate screening limit.

Figure 5 suggests that an L/d screening limit of 40 may be more appropriate when strain is determined using the ASME B31.8-2018 equation. However, the majority of the samples were selected for assessment because their L/d was less than 20. It is thus feasible that if a larger sample of dents with an L/d between 20 and 50 were to be assessed, then an even more conservative limit should be considered.

It can also be observed from Figure 4 and Figure 5 that the absolute difference in calculated strain using the 2016 or 2018 equation is greater for sharper dents. 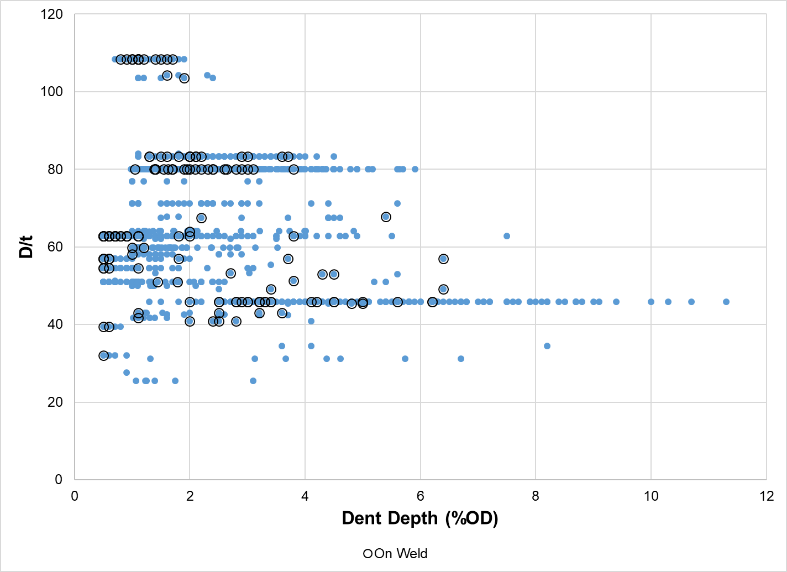 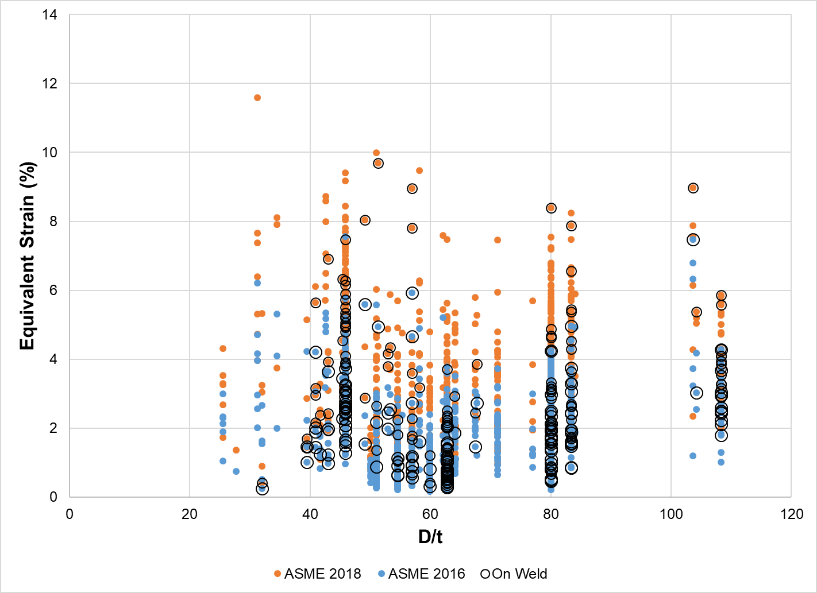 No strong correlation between D/t and equivalent strain was observed.

The data sample reviewed as part of this study suggests that an L/d screening limit of 40 may be more appropriate when strain is determined using the ASME B31.8-2018 equation.

It is recommended that the industry review a larger data set to identify a more appropriate screening limit. The authors acknowledge that the majority of the sampled dents were selected for assessment because their L/d was less than 20. To elaborate, only a limited number of dents with L/d between 20 and 40 were assessed, so it is feasible that if a larger sample of dents with an L/d between 20 and 50 were to be reviewed, then a need for a more conservative limit may be considered.

[1] ASME B31.8-2018, Gas Transmission and Distribution Piping Systems, ASME Code for Pressure Piping, B31, The American Society of Mechanical Engineers, 2018.