The majority of the world’s pipelines are located either onshore or offshore. But there is a small number of pipelines that cross a beach. There is even a smaller number of pipelines that start on a beach and end just after where the waves break. These are typically (off)loading lines. For these assets, just like for any other pipeline, we need to ensure that whatever is inside stays inside. Could you imagine what it would do to nature, tourists and a company’s reputation if there was an oil spill in close proximity to the shore? In this article, ROSEN expert Tom Steinvoorte explains the importance of loading-line integrity management.

One particular project we recently worked at was in Israel. IEC (Israeli Electric Corporation) operates three pipelines used to import fuel to feed their power plants. These pipelines are connected to a shore-based installation such as a refinery or tank farm, for example – to a subsea pipeline end manifold (PLEM). The PLEM is usually situated under water, around 25 to 60 meters deep, and is connected to a buoy by a flexible hose or multiple hoses. These floating flexible hoses complete the connection to the tanker. Figure 1 shows a typical configuration.

The three lines mentioned had previously been inspected by several companies throughout the years. After the last inspection in 2015, a leak occurred, creating an oil spill of about 40 m3. Investigations revealed that the leak was caused due to a crack in one of the lines. Therefore, the goal for the 2020 in-line inspection was to focus not only on corrosion but also on cracks. In addition, one of the lines contained a significant dent that needed to be assessed.

HOW TO KEEP THE BEACH CLEAN?

In order to assess the integrity of the pipelines, our experts used a self-propelled, tethered inspection approach. This specific inspection strategy involved a cleaning, a combined wall thickness and geometry inspection, and a combined crack inspection.

All field work was performed in October and November of 2020 by the Israeli contractor Maagan Marine & Diving Works Ltd. (hereinafter: Maagan), who handled, supervised, executed and facilitated all supporting activities. ShareGas, ROSEN’s representative in Israel, facilitated all logistic aspects. It is important to point out that the client chose this time of year because it is the best time for marine activities such as diving and lifting.

For wall thickness measurement, conventional Ultrasonic Testing Pulse Echo (UT PE) is used – the equivalent of ROSEN’s RoCorr UTWM technology), with one fundamental difference: The sensors do not touch the pipe wall (they do not feature a carrier design) and are mounted on a ring instead (fixed stand-off). The benefits for tethered applications are that there is less friction and that the sensors are less likely to collect debris. In addition, this design allows evaluators to derive high-resolution geometry information from the stand-off signal.

For crack inspection, a combination of two technologies was used:

In a TOFD system, a pair of ultrasonic probes sits on opposite sides of a weld. One of the probes, the transmitter, emits an ultrasonic pulse that is picked up by the probe on the other side, the receiver. In undamaged pipes, the signals picked up by the receiver probe are from two waves: one that travels along the surface and one that reflects off the far wall. When a crack is present, there is a diffraction of the ultrasonic wave from the tip(s) of the crack. Using the measured time of flight of the pulse, the depth of crack tips can be calculated.

TOFD is commonly used for external inspections. It is, however, not available on board free-swimming in-line inspection tools because the process is slow and requires highly accurate positioning of the sensors on the welds. For tethered tools, this is now possible – the tool stops at the location to be scanned, and the sensors are positioned and deployed. The below image shows the revolving measurement head from the tool scanning a girth weld. 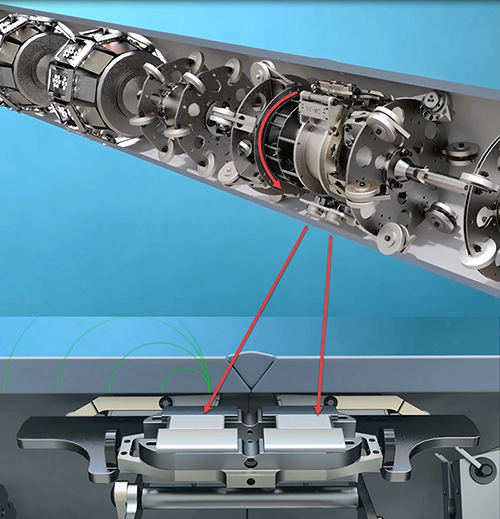 The advantages of the combined inspection regarding POD (Probability of Detection), inspection time and defect sizing are shown below:

As the inspection time has a direct impact on the overall costs, the advantage of using the PE method for fast screening is obvious. On the other hand, precise sizing of detected crack-like defects as provided by TOFD is important for reliable Fitness-for-Purpose (FFP) assessment and for better planning of result-dependent future activities.

Therefore, to maximize the benefits from both technologies, UT PE is used to detect and size cracks on a first pass. The location of the cracks is stored, and TOFD is applied on selected welds on a subsequent pass.

In general, the client’s pipelines to be inspected were not designed for pigging. There were no traps, and the line started below sea level and was not really clean. But our UT technology needs a clean surface, especially because we do not only measure for wall thickness but also for cracks. Alternatives such as hydrojetting and line flushing were considered, but the team concluded that running mechanical cleaning pigs was the reliable way to go.

That meant that, despite using a tethered solution for the inspection, we still had to make the 32” and the 24” pipeline piggable in order to clean them. The 16” pipeline had only been in service for a few years, transporting white products, and therefore did not need to be cleaned.

The 24” pipeline had to be put back in operation; therefore, after the inspection was completed, the line had to be filled with crude oil again.

During the operation, the line was out of service. Therefore, IEC filled up their storage tanks just prior to the start of the operation. It was up to the team to complete the scope as fast as possible – definitely before the storage tanks ran empty – so that fuel import could resume and power generation was not interrupted. Therefore, the team worked 24/7 during the inspection of the 24” pipeline.

In order to provide the required flow for the cleaning pigs, temporary pumps and associated pipe work was needed. The sketch below shows the pumping equipment setup. 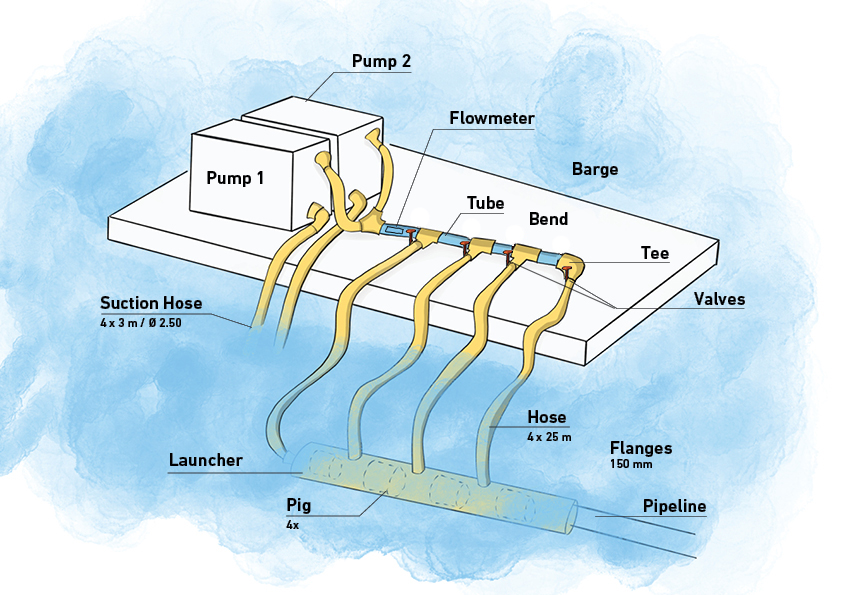 The pumps were provided by an external Dutch-based company. To minimize subsea activities, the launcher was pre-loaded with four cleaning pigs, which were launched one after another by Maagan’s divers who activated the valves on the manifold.

For the marine work, a multi-purpose utility vessel was used, provided by Maagan, the contractor awarded the IEC tender. The vessel provided a stable work platform for pumps, manifold, hoses, subsea pig trap and crew, and it came with diver support and a 65-ton crane to remove the PLEM and install subsea pig traps. 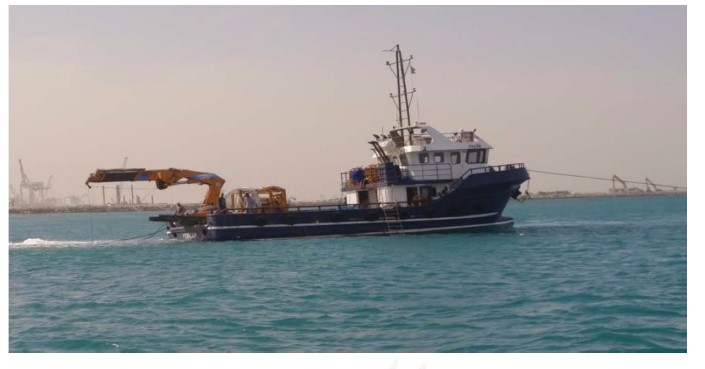