Why do you keep your vehicle well maintained? Why do you run virus scans and cleaning programs on your at-home computer? For the same reason all facilities and pipeline operators perform regular evaluations of their assets. Making sure you keep your car well maintained or your computer up to date makes sure you avoid unexpected breakdowns or accidents. It also makes sure you get the longest and best operation out of your well-oiled machine. When operating an entire pipeline network or a tank storage facility, this is the case for every asset in the network. In this article, ROSEN experts in Mexico were able to make a series of recommendations for the continued safe operation of the client’s asset based on the results from the data and information collected during Non-Destructive Testing (NDT) techniques.

This case details the mechanical integrity analysis of an 8-inch oil pipeline in a facility. Through a variety of Non-Destructive Testing (NDT) techniques, the goal was to optimize pipeline operation strategies through a preventative and corrective maintenance program for years to come. This implied determining any type of damage on the pipeline itself using conventional NDT testing for the above-ground sections of pipe and ultrasound-guided wave for buried pipe sections, all according to API 570. In addition, each inspection would be followed by a recommended action, which may include subsequent monitoring, additional analysis and corrective actions. Altogether, this would result in a plan for future inspections as well as generate a baseline for any future integrity activities and monitoring of damage mechanisms.

This particular asset was both buried and unburied, calling for a variety of different inspection techniques, starting with the exposed sections.

Visual Inspection
To determine the condition of the outer surface of the 8” oil pipe – assessing things such as damage to paint, coating, evidence of leaks, misalignments, condition of the welds, reinforcements and supports, and general alignment of the pipe on its supports – a visual inspection was completed, which would also determine the location, orientation, shape, size and type of any discontinuities found. 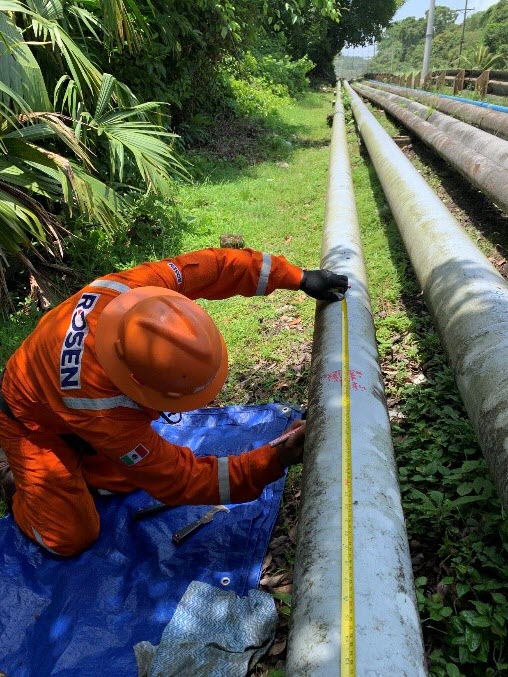 Figure 1 – During a visual inspection, any visible features are measured and documented

Thickness Measurement
Examination points were assigned along the entire length of the unburied pipe where periodic inspections were performed to obtain a repeatable wall thickness measurement, thereby assessing the condition of each component. Monitoring points were established at the 12, 3, 6 and 9 o’clock positions of the pipe, 10 cm behind each circumferential weld and every meter after. This allowed for accurate baseline data to calculate corrosion growth rates, remaining lifetime and recommend future inspection periods. To collect this data, in-field personnel utilize a combination of UT meters and visual inspection. Essentially, a “spot check” of predetermined sections of pipe is performed, which can be revisited at predefined intervals of time to progressively monitor changes to the pipe’s integrity status.

Internal Discontinuities
To detect any internal discontinuities such as wall thickness loss due to erosion, corrosion or chemical reactions with the environment, a straight-beam ultrasound technology was used. 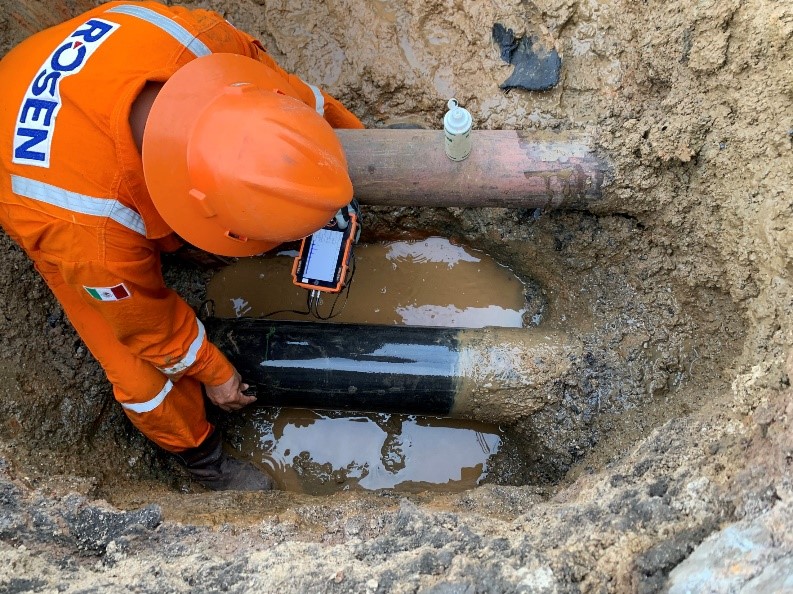 To gain an integrity status of any buried piping along the pipeline route, our experts employed UT-guided wave. Long-range ultrasonic testing (LRUT) is ideal for inspecting piping with limited accessibility, such as buried pipe at road crossings, where the pipe’s path inside a refining facility physically dips underneath a road (or other facility infrastructure) and continues on the other side. LRUT technologies allow low-frequency, guided, ultrasonic bulk wave transmissions to propagate into the pipe from a transducer array fixed around the pipe; the technology operates just above audible frequencies. These low frequencies are necessary to enable an appropriate wave mode to travel the surface of the pipe. 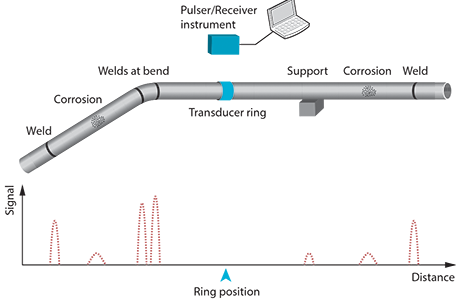 Figure 3 – This diagram shows the LRUT collar on the pipe, ideal for inspecting piping with limited accessibility

The guided waves can travel many meters and are therefore used to test large areas from a single point. Any changes in the thickness of the pipe – on either the interior or the exterior wall – cause reflections that are detected by the transducer array wrapped around the pipe. The system enables a trained operator to discriminate between metal loss and pipe features – welds, in particular.

In this case, the soil-to-air interface was a particular focus. Soil-air interfaces present a unique risk to facility pipes as they often come into contact with more oxygen than buried pipe and are often located in wet ground, increasing the risk for corrosion. After having conducted the initial inspection, the soil-air interface was excavated in accordance with API 570 as features were reported; later, it was inspected with the LRUT system in order to locate possible internal – or external – metal losses.

The data collected by the variety of NDT techniques is compiled into a series of reports that consolidates information on any features, wall thickness along the entire pipeline and geometric features, including installations such as supports and valves. This collection of data is then evaluated based on various procedures, standards and codes, including ASME B31G, API 570, API 580, etc. In this case, the data collected from the 8-inch pipeline was “ranked” according to the Estimated Remaining Life (ERL). All features were categorized into four sections, each tied to different recommendations for response.

In addition, features were categorized by percentage of material lost. For this group of recommendation criteria, three distinct groups were determined.

In this case, the inspection results identified three features with greater than 70%, eleven features with 50% to 69%, 76 features with 10% to 49% and 14 features with less than 10% material loss. Given these the results, recommendations were made, and the operator was able to make mitigation decisions.

Based on the results from the collected data and information, ROSEN was able to make a series of recommendations for the continued safe operation of the asset. These included: