Inertial measurement unit (IMU) technology has become an integral tool in the management of geohazard threats. Initially used to improve line location and reduce the size of excavations, today IMU is utilized to determine whether the pipeline has been moved from its original shape and, if multiple inspections are available, potentially even the rate at which the pipeline has moved. In this article, ROSEN experts Rhett Dotson and Alexander Brown examine the repeatability of IMU technology to identify and quantify bending strain locations by comparing eight different pipeline segments that were inspected between seven and ten times each between 2018 and 2020. The data collected allows a comparison of multiple bending strain areas, demonstrating tool repeatability and reliability for managing pipeline integrity in geohazard areas.

Of all the existing threats putting pipelines at risk today, geohazards have become some of the more heavily scrutinized pipeline perils in the last several years. Preceding the updated gas rule, regulatory guidance was fairly limited. CFR 192.317(a) only stated that “[t]he operator must take all practicable steps to protect each transmission line or main from washouts, floods, unstable soil, landslides, or other hazards that may cause the pipeline to move or to sustain abnormal loads.” However, this regulation is related to general construction requirements for transmission pipelines rather than integrity management. Integration of inertial measurement unit technology to help calculate bending strain and capture the impacts of ground movement on pipelines is also a relatively new concept in the pipeline industry. Furthermore, pipe-soil interaction is poorly understood industry-wide. Moreover, defining a universal strain limit or prescriptive regulations for allowable strain or movement is difficult, given that pipelines have widely varying levels of susceptibility to geohazards. These factors contribute to the significant variation among operators as to how adequately their integrity management programs (IMPs) address the threat of geohazards.

IMU technology has now advanced such that it can determine if a pipeline has moved from its original shape and, if multiple inspections have been performed, quantify the rate of movement. Consequently, regulatory guidance has been updated to reflect that if an operator recognizes “outside force damage” as a credible threat to their pipeline, the operator must take measures to minimize the consequences of ground movement. CFR 192.935(b)(2) explicitly lists the use of “in-line inspections with geospatial and deformation tools” to assist in this endeavor. In theory, utilizing IMU to perform pipeline movement assessments can be a beneficial tool in an operator’s integrity management plan. Unfortunately, few operators have enough data in the form of repeat inspections from the same pipeline system to examine the repeatability of IMU technology in identifying and quantifying bending strain and movement. Therefore, to date no significant studies investigating IMU repeatability exist, primarily because most integrity assessments occur in five- or seven-year intervals. This study examines IMU repeatability and reliability using data collected from eight piggable segments within the same pipeline system that were inspected between seven and ten times each from May 2018 to October 2020. This study will also examine tool interactions with pipeline features (i.e. fictitious signals), offer examples of verified movement and identify a potential avenue for further innovation with IMU technology.

Before the performance of bending strain assessments is reviewed, it is worthwhile to discuss the methodologies used to perform bending strain assessments. In-line inspection (ILI) tools equipped with IMUs record angular and lateral accelerations rather than position or velocity. Dead reckoning is used to generate geospatial coordinates (i.e. GPS coordinates or eastings/northings) when the known reference points such as above-ground markers (AGMs) are incorporated into the inspection. However, it should be noted that the presence or absence of reference points has no impact on the calculated bending strains for a pipeline segment.

Bending strain locations are identified based on two primary factors. First, reported strain must meet the minimum reporting threshold of 0.125%. Second, the minimum affected length should be at least 40 to 60 feet. These minimum reporting requirements separate legitimate bending strain and curvature from fictitious signals resulting from girth welds or other pipe-tool interactions. They also help to distinguish strains expected in the pipe, such as field bends.

While identifying bending strain is a useful tool in any IMP, it only reveals the pipeline in its current state as opposed to exactly how and when the bending strain materialized. Pipeline movement assessments compare inertial responses from successive IMU inspections in which both bending strain and out-of-straightness (OOS) profiles are compared to identify movement. These assessments are most effective when comparing both strain and OOS, because pipe-tool interactions and even tool configuration (i.e. combination tool vs. caliper only) can cause variations in strain that may appear as fictitious movement. Similar to bending strain, the OOS comparison does not rely on AGMs for accuracy, as OOS measures the local change between two points to determine movement. AGM positioning only impacts the calculated geospatial location of a pipeline movement or bending strain area.

Pipeline movement assessments can detect locations that have undergone changes in strain greater than 0.06%, which is slightly higher than twice the stated accuracy of a single bending strain assessment (i.e. ±0.02%). The minimum threshold for detected movement is listed as 7.9 inches (0.2 meters) over a span of 40 to 60 feet, but when monitoring for known or suspected locations, features below the movement threshold can be identified. Figure 1 shows an example pipeline movement comparison in which the OOS, strain and pitch/azimuth profiles are plotted together for two separate inspections. Red lines represent the first inspection, blue lines represent the most recent inspection, and green lines represent the calculated difference between the two inspections. The example reveals a strain change of 0.4% and approximately seven feet of lateral ground movement. 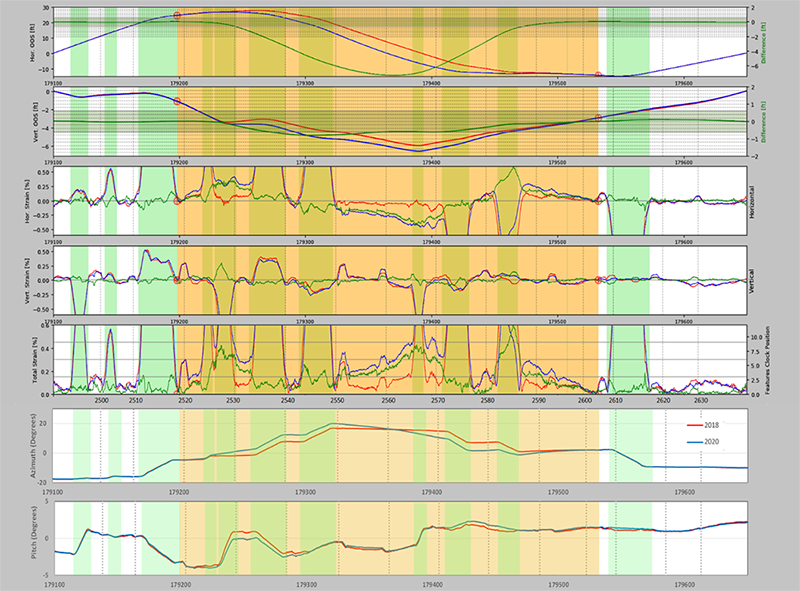 This study covered eight piggable segments spanning approximately 300 miles. The outside diameter (OD) and pipe grade for seven of these segments are 36 inches and X70, while the remaining segment is comprised of 24-inch, X52 and X65 grade pipe. Wall thicknesses ranged from 0.515 inches to 0.875 inches for 36-inch pipe and 0.375 inches to 0.625 inches for 24-inch pipe. The maximum allowable operating pressure (MAOP) for all segments is 1,440 psi.

Table 1 summarizes the following information associated with each piggable segment: pipeline ID and select characteristics, inspection frequency, number of bending strain (BSTR) anomalies, and verified areas of pipeline movement (PLMM). All segments have had between seven and ten inspections performed throughout the course of this study, spanning from May 2018 to October 2020. Most inspections were performed using an IMU combined with a caliper tool (XGG), but a few inspections were also performed using a combined MFL-A and caliper tool (CXG). In total, this case study identified 166 bending strain anomalies and 13 verified areas of pipeline movement. The goal of this study was to establish the repeatability and reliability of bending strain data at peak strain compared to the previously stated tool accuracy of ±0.02% while also observing repeatability associated with pipe-tool interactions such as girth welds and field bends. 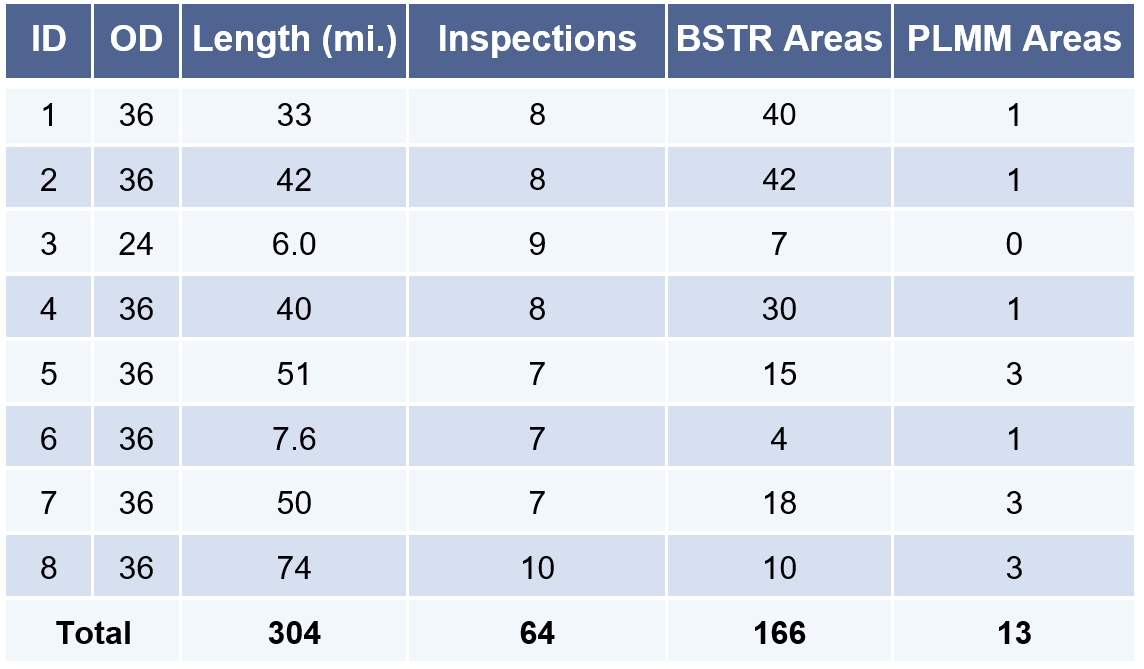 Pipe-tool interactions contribute the most to variation in peak bending strains; these are grouped into the following five categories: girth weld interactions, field or pipe bends, wall thickness changes, tool configuration (i.e. XGG vs. CXG), and data artefacts. Of these five categories, girth weld interactions and pipe bends merit the most discussion because they are the most prevalent and well-understood sources of variation. Additionally, nearly 15% of all bending strain calls (168 of 1,229) experienced variation as a result of pipe-tool interaction, further suggesting this particular topic is worth exploring.

Figure 2 offers an example of a field bend influencing peak strain variation. Pink shading represents the extent of the bending strain call, and green shading indicates a field bend. The total bending strain plots of the first six inspections (out of nine total) performed in this piggable segment have been overlaid, and the tool configuration for each inspection was also detailed. Blue dotted lines represent variation caused by the field bend in the center of the image. There is clear variation upstream and downstream of the field bend, but it is more pronounced in the upstream direction. The maximum peak strain observed upstream of the field bend is 0.35%, while the minimum peak strain at the same location is 0.25% (i.e. a variation of 0.1%).

Equally striking in this plot is the strain variation occurring at the girth weld that is purposefully excluded from the bending strain call, represented by red dotted lines. The maximum strain observed at the girth weld is 0.26% (not pictured), and the minimum is 0.10%. A strain difference of 0.16% spanning only eight feet can be confidently attributed to a data artefact, especially since the total bending strain upstream and downstream of the girth weld is no higher than 0.05%. This underscores the challenges inherent in reliably reporting bending strains at all girth welds.

Thirteen confirmed areas of pipeline movement were discovered over the course of this study. A summary of these locations is provided in Table 3. Note that ten of the 13 locations were associated with horizontal or combined pipeline movement. 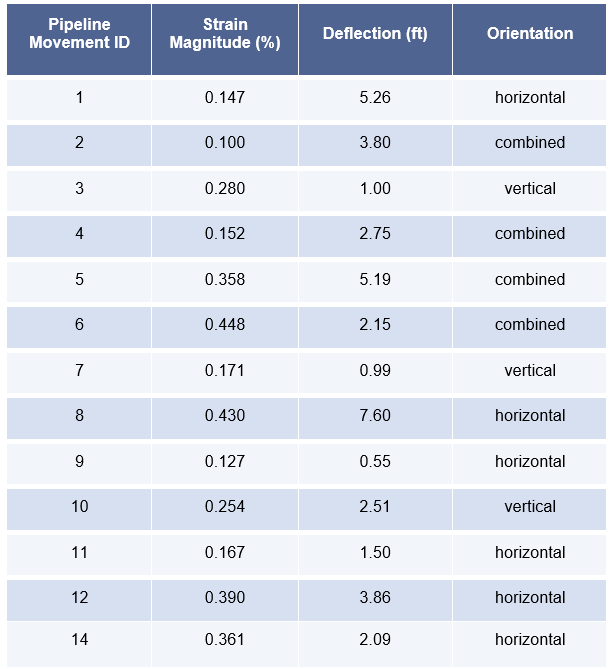 One of the more notable calls is shown in Figure 3, which originally reported approximately two feet of lateral movement and a corresponding bending strain of 0.36%. Without any advance notice from the operator, a subsequent inspection revealed two feet of lateral movement in the opposite direction. After conversations with the operator, the analyst confirmed a stress-relief operation had taken place and had been correctly identified at this location. 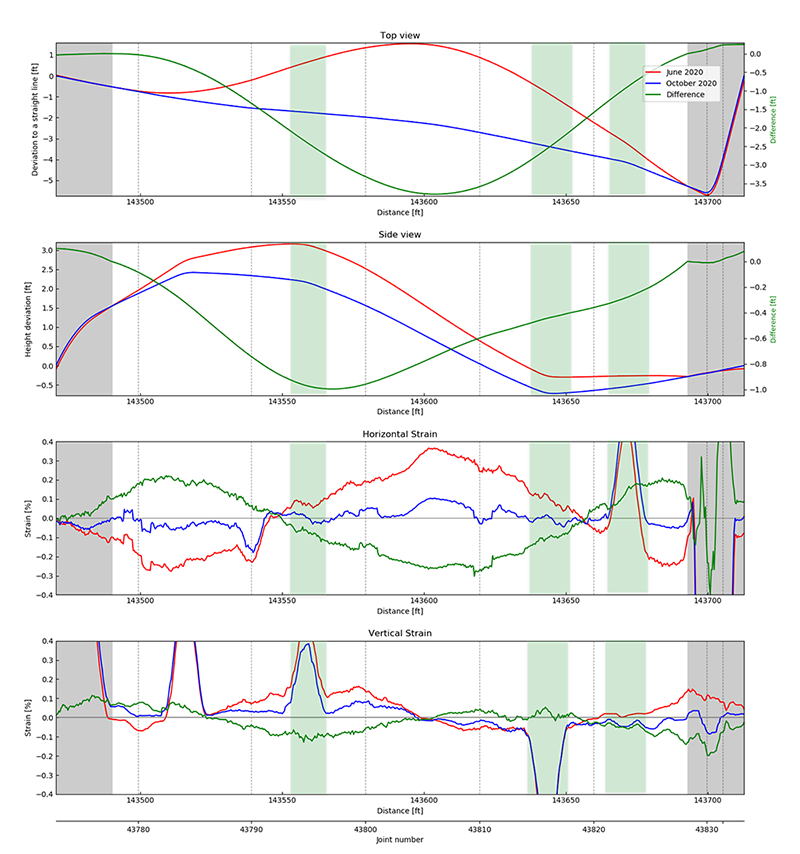 Bending strain and pipeline movement assessments are an invaluable tool in any operator’s IMP, and the repeatability case study supports that IMU can be expected to perform within a stated accuracy of ±0.02%. The variation of ±0.026% among peak strains based on the 80th percentile is excellent when compared to typical integrity limits for bending strain industry-wide; it is expected to improve if altered to a point-to-point approach. Since this study, there has been at least one (but as many as three) inspections performed in this pipeline system, and efforts to incorporate IMUs with cleaning pigs to more effectively facilitate successive pipeline movement assessments are currently in the developmental phase. IMU technology will undoubtedly continue to mature and rise to meet the demands of protecting against often unpredictable geohazards, particularly as regulatory bodies provide updated and comprehensive guidance on safe pipeline operations. 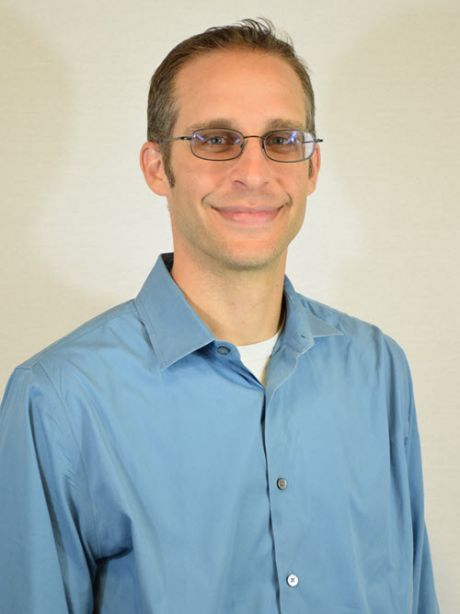 Rhett Dotson has worked as a consultant in the oil and gas industry for 15 years. Rhett has developed technical expertise in the analysis and testing of structural components and pipeline systems. His work with offshore systems has included strength and fatigue analyses performed on topsides and subsea components. His work with pipeline systems has included assessment and engineering support for anomalies such as dents and wrinkle bends in vintage pipeline systems as well as accident investigations due to third-party damage in both onshore and offshore pipeline systems. Rhett has also served as an expert witness for a pipeline operator in a case involving settlement-related issues. Recent structural work has included the analysis and remediation of damaged natural gas pipelines and the determination of in-place pipeline strains based on survey data and finite element calculations. 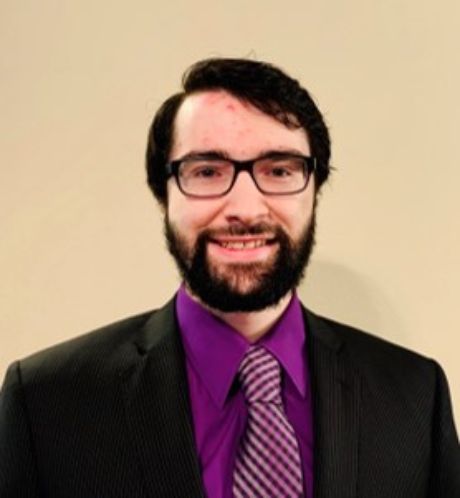 Alex Brown has three years of experience working for ROSEN as a pipeline integrity engineer. During this time, Alex has worked extensively with bending strain and pipeline movement assessments to help identify potential geohazards for operators. He also has experience with MAOP reconfirmation projects and identifying pipeline anomalies associated with corrosion and dents.