633 miles, 1,019 kilometers, 550 nautical miles – that’s looong. That’s the length of a pipeline that needed to be inspected, requiring a single tool that could handle a very long trip. Not just that, but a tool that could reliably detect and size cracking, measure wall thickness and provide a geometry inspection. Crude oil buildup, battery life and data storage are among the challenges faced when developing a solution, an in-line inspection tool that could inspect a monster like this one. It would take five million barrels of crude oil to carry this tool along a span of 633 miles from the launcher to the receiver; it would need to be equipped with extended battery life to last up to 40 days in the pipe, AND it had to hold up to an estimated 33 terabytes of raw input data. Processing that amount of data is a feat on its own! 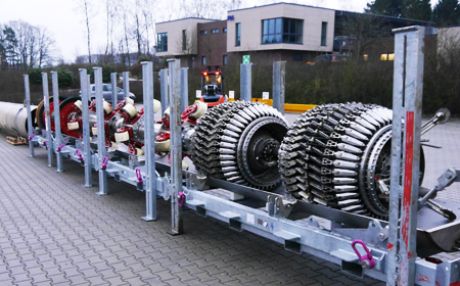 After a year and a half of planning, developing and testing, it was finally time to do the actual work! The in-line inspection would be preceded by a series of cleaning runs to ensure high-quality data recording was possible. In addition, the geometry inspection was conducted, completing the required pipeline mapping using extended caliper technology and ensuring safe passage for the infamous Mega-tool to follow. Finally, weighing in at 5,100 kg (11,244 lbs), the UT wall measurement and crack detection tool could be launched. Lifted and loaded by a 60-ton crane, it embarked on its lengthy journey through the U.S. countryside. Active tool tracking provided ever-building excitement among operators as the tool came closer and closer to its destination. Thirty-five days later, it arrived at the receiver – STILL ON – and having recorded 633 miles of data.

When all was said and done – when the weight of the tool was lifted from the receiver and pipeline professionals around the world could take a breath – this lengthy journey through the 633-mile pipeline came to an end, having collected terabytes of valuable data. The necessary data checks were completed, and the data evaluation is still ongoing.