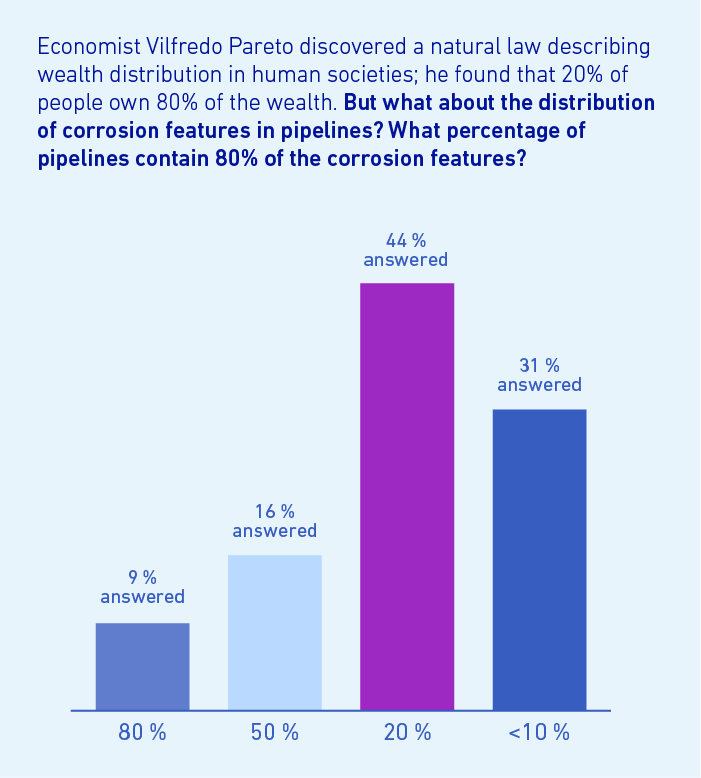 Did Vilfredo Pareto have a secret passion for pipeline integrity management? Alas, probably not. But his principle (or at least something resembling it) can be seen in many science and engineering disciplines, including asset care. In general, it describes the natural tendency of “things” to become extremely unequally distributed among a population.

Apparently, many of you had an intuition that this would apply to corroded pipelines, with ¾ of respondents guessing 20% or below. Working with in line inspection (ILI) data, you certainly do get a feel for this pattern. You’ll see many pipelines that are in excellent condition, and then one or two with extremely pervasive corrosion. This isn’t random, of course. There’s usually a good reason for the damage – for example, an old, degraded coating leading to external corrosion, or a corrosive and uninhibited product causing internal corrosion.

To put some numbers on this, we investigated a small but diverse sample of our ILI data (~11 million features reported in ~1,000 pipelines). Shown below are histograms of the external and internal corrosion ”feature count” (number of features per mile) for the pipelines in the sample. Note that these are plotted on a logarithmic scale, so the symmetry implies a heavy positive skew.

The median feature counts for both external and internal corrosion are ~10 mile-1. This implies that a large proportion of pipelines are contributing very little to the total quantity of corrosion. The majority of corrosion features are instead coming from the small number of pipelines with counts of over 10,000 mile 1. In fact, we calculated that 80% of the features are coming from only ~6% of pipelines. That’s even more unequal than wealth (maybe not by today’s standards, but certainly more unequal than Pareto’s 19th-century Italy).

Clearly, there’s a proclivity for extreme cases to emerge out of the general population. But what, if anything, can we do about this? Not much can be done to balance things out (after all, a “corrosion tax” doesn’t seem very plausible!). Instead, the focus should be on identifying the causes of extreme pipeline damage and tackling them before they’ve had a chance to take effect. That said, it’s worth noting that feature count is not the only measure of corrosion damage; feature depth and corrosion growth rate are important, too. We should also ask ourselves how these condition metrics actually correlate with the occurrence of pipeline incidents. In short: what do the “bad” pipelines have in common, and how do they differ from the “good” pipelines?

Answering these kinds of questions is the age-old challenge of integrity management, and ROSEN is determined to meet this challenge with #IntegrityAnalytics .