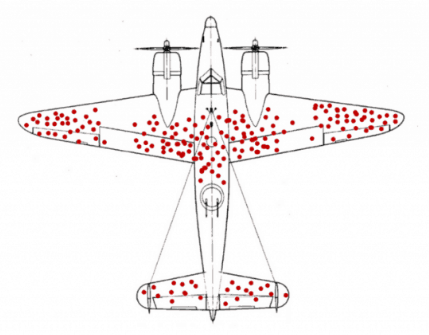 Here is an image showing the most commonly hit places on returning fighter planes during World War II, as documented by the Hungarian statistician Abraham Wald.

You have a decision to make: where should you build armored plates? The plates are expensive, so you can’t reinforce the whole plane!

This poll has ended. Please check the results and the explanation below:

The trend is quite distinct. Most of the damage has been sustained on the wings and tail.

So that’s where we should add the armored plates, right?

Wrong! The correct answer is (a).

The first thing we should notice here is the conspicuous absence of damage on the cockpit and engines, when the damage is roughly uniform elsewhere. Doesn’t that seem a little bit unusual?

So unusual, in fact, that it raises some questions about the validity of the dataset.

The key point here is that these are returning fighter planes – planes that actually survived battles. That makes for a highly biased sample (see Survivorship Bias). Sadly, those planes that were damaged on the cockpit and engines were much less likely to return, and consequently that’s where we should be reinforcing the planes.

There was no fooling our LinkedIn audience this time, however, since a whopping 70 percent chose the right answer!