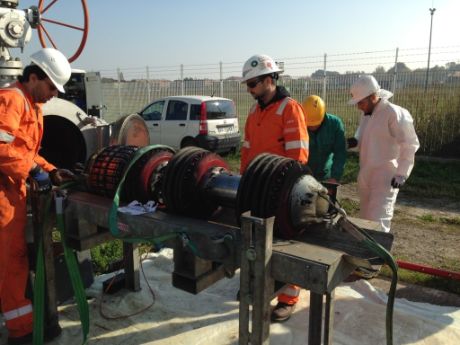 For several years, the ROSEN Group has worked closely with an Italian natural gas infrastructure company to support the integrity assessment of their distribution network. Most recently, ROSEN has been asked to provide an inspection solution for a 16” pipeline that supplies product to customers through various offtakes distributed along the pipeline. The gas velocity is stronger at the beginning of the pipeline but then reduces after every offtake, reaching a velocity as low as 0.1 m/s. The specific pipeline operating conditions ruled out the possibility of applying a standard approach.

The pipeline operated at approximately 45 bar pressure, hence excessive speed variations that are typically observed during the inspection of low pressure lines were not to be expected. Instead, the risk was that a tool become stationary due to insufficient sealing. Even the smallest leakage over the tool can create an unwanted bypass and cause the tool to be lodged. The solution therefore concentrated on designing a customized pull unit which provided optimum sealing in all diameters present. In addition, a low-friction magnetizer was used to reduce the risk of a stationary tool due to bypass. Furthermore, the total inspection time was extended by installing additional batteries in the pull unit.
As with every Challenging Pipeline Diagnostics project, one of the key golden rules is: what goes in must come out. ROSEN’s Solution Experts were confident that the tool would come out. However, given the innovative nature of the inspection, it was agreed that in the event of a stationary tool, a temporarily increased flow would be created by depressurizing the line downstream of the tool.
In order to confirm free passage for the ILI tool, a run was made first with a gauge tool equipped with a Pipeline Data Logger (PDL), which is a transmitter for accurate tracking and locating of equipment. Assessment of the gauge tool confirmed free passage for the MFL inspection system. Furthermore, the differential pressure of the PDL revealed no unexpected run behavior. However, the total run time of 168.15 hours revealed that the flow conditions were more challenging than expected: the gas velocity in the last 6.5 km was as low as 0.01 m/s.
ROSEN accepted the challenge nevertheless and decided to launch the MFL system. The tool was received 145 hours later. The runtime, as well as the system’s condition, indicated that excellent sealing was achieved. Unfortunately, the data was not complete due to electronic failure resulting in sensor loss. A rerun was recommended in order to deliver the contractually-agreed data quality.
The rerun was executed, and the MFL system was received two days later in good condition. The inspection was successfully completed within the pre-agreed contractual requirements.