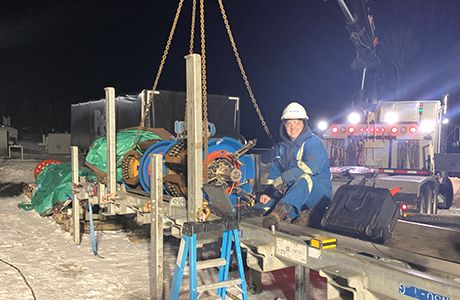 You can find Travis most often on-site as a Level 2 Technician for our Field Services department. Although he is often out of the office on jobs, he is well known by his co-workers in Calgary, Canada, as well as in our neighboring regions, the United States and Central America, where he was helping out our regional colleagues for three months over the summer.

READY TO HOP DOWN UNDER

The global presence of ROSEN and the accompanying opportunities to travel and explore other parts of the world are a big draw for Travis. In the not-so-distant future, he plans to join our colleagues in the ROSEN office in Norway. When at home, Travis mentions enjoying a slower pace and how much he appreciates quiet activities outside and around the yard as a nice contrast to the fast-paced environment of being on the road so often.

IN IT FOR THE LONG RUN

The last eight years of his career have been spent in similar roles – in some capacity in Field Operations in the oil and gas industry – and he hopes to continue in the industry for “as long as they will have me.” And, going back to his high school days, Travis volunteered as a firefighter and emergency medical technician, which definitely was helpful for his skills in his career now.

The ROSEN Group serves Canada from its flagship office in Calgary, Alberta. The city serves as the headquarters for many national and international energy companies, making it the ideal location from which to support operators, as well as those in other industries. read on read on Discover more