Experience a new level of team spirit and teamwork 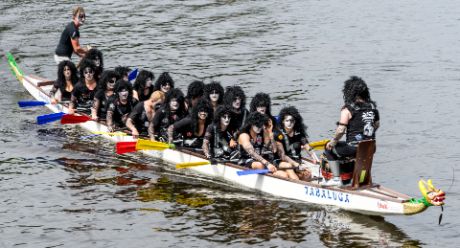 In all sporting activities, performance is not the most important aspect — it is team spirit. It is not about achieving the best performance, but about spending time together, mastering the challenge together, combining sports and social life, and meeting new faces that will become not only colleagues, but possibly even friends. It is the team’s performance that counts, whether in tricots or in colorful outfits. 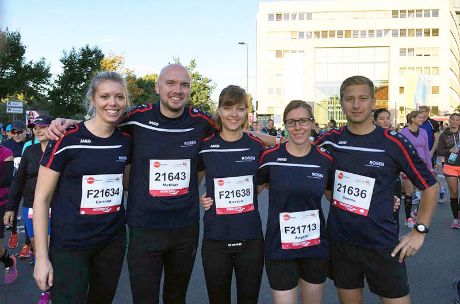 At our location in Lingen, Germany for example, we have company sports groups in soccer, tennis, running and dragon boat race. The employees meet on a regular basis to work out together and participate in sporting events such as marathons or soccer tournaments. This brings employees of various departments and locations together outside the workplace. One example is our annual soccer tournament, at which employees from the Lingen, Germany and Oldenzaal, Netherlands locations play against each other. ROSEN employees had a chance to win a trip to Houston, Texas, on one condition: they had to run a marathon in order to earn their airfare. As the idea — along with the running fever — spread to ROSEN offices around the globe, a total of nearly 80 ROSEN employees from four countries ended up accepting the challenge of running a marathon or half marathon in January 2013.

In the end, employees from Oldenzaal, Lingen, and Bogota landed in Houston with their running shoes in hand and their hearts filled with team spirit. Co-workers from our Houston office completed the ROSEN running team. After more than a year of preparation, ROSEN employees from three continents were ready for their once-in-a-lifetime experience: together they participated in one of the fastest marathon courses in the world — the Chevron Houston Marathon. Shawn Peet, Manager of Operations, is a valuable member of our ROSEN office in Houston, USA. Shawn took up mountain climbing more than four years ago, and has already conquered the highest peaks on three different continents, including Mt. McKinley in North America and Mt. Aconcagua in South America. Driven by his own self-motivation, Shawn has taken his desire to climb the world’s mountains to yet another level of inspiration.
His Climbing for Hope initiative is raising money for good causes including The Alberta Children’s Hospital and The Texas Children’s Hospital. The ROSEN Group is proud to support Shawn in his climbing efforts, and in line with our company attitude towards safety and reliability, ROSEN has provided Shawn with a range of safety equipment for climbing. During his ascents ROSEN tracks Shawn via a GPS transmitter that relays his location and status while on the mountain.
Chris Yoxall, Vice President ROSEN USA, says, “Shawn is a great global citizen who decided that his passion for climbing could benefit others.”

ROSEN Europe B.V. organized a bike tour event that covered several countries and featured a charity dinner in each country. ROSEN clients, diplomats from the Dutch embassies, and local celebrities supported the dinners.

ROSEN employees in the Perth office (Melbourne, Asia-Pacific region) have organized a number of charity cycle events, including: A charity cycle ride for The Asthma Foundation of Western Australia, The annual ‘City to Surf’ cycle marathon with ROSEN employees, a 600km charity bike ride from Albany to Fremantle (in Perth) for Fremantle Hospital Medical Research Foundation and also a 200 km ‘Ride to Conquer Cancer’ in aid of the Western Australian Institute for Medical Research.