How Low Can You Go?

Answering the most raised question in the upstream gathering sector

Most in-line inspection tools were initially designed to inspect a line with a certain degree of high pressure. However, with most natural gas assets operating at increasingly lower pressures, the market needs innovative solutions to tackle those challenges. In this article, ROSEN expert Zachary Farrell dives deep into the question of how low the gathering sector can go in terms of inspection and pressure.

With assets beginning to age, the need for integrity solutions strongly increases; upstream natural gas assets are no exception in this regard. However, what is challenging about inspecting those type of pipelines is that most of the time they operate at lower pressures, making it difficult to run conventional in-line inspection (ILI). Thus, the most commonly asked question we receive from customers in the upstream gathering sector is, “How low of a pressure can you run at?” Finding an answer to this question mostly depends on parameters such as number of fittings and bends in the pipeline as well as the actual size of the pipeline. Usually, the line to be inspected is 8” or less in diameter.

When it is impossible to increase pressure on a pipeline with normal production, it is common practice – though often cost-prohibitive – to add supplemental natural gas or nitrogen. This has created a need for conventional in-line inspection tools with more compliant specifications. Our solution is our set of compact low-pressure-capable tools with the ability to go as low as 1,800 kilopascals (kPa) of line pressure. Catering to pipelines from 6” to 20” in diameter, ROSEN’s Upstream Diagnostics Service is a new solution for a growing challenge.

TAKING ON THE CHALLENGE

Challenging 6” to 8” natural gas pipelines with a standard operating pressure of 2,500 kPa or less are addressed in this article. The lines are 25 km or less in length and frequently have multiple areas of heavy wall thickness and tight radius bends. Our experts have completed several inspections that included increasing pressure with supplemental gas or cutting the pipeline into sections and tethering with a bidirectional tool. However, using standard free-swimming tools during inspection has resulted in overspeed or tools getting stuck due to pipeline operating conditions. In most of the lines inspected with 2,500 kPa or less, line pressure will have an effect on velocity, as the tool is passing through tight radius bends (3.0D or less). There is not enough head pressure in the pipeline to act as a brake for the in-line inspection tool, which results in a loss of useable data. The standard MFL-A tool will need to operate at a maximum of 5.0 m/s, with an ideal range of less than 3.0 m/s.

Our approach included conventional MFL-A, caliper and XYZ (high-resolution mapping) technologies built into a smaller and more compact form factor with less weight and high compliance. The technique of combining MFL-A/MD and XYZ technologies on one tool has been used for a number of years in a fast turnaround application with a robust design and small form factor. Coupled with hydrogen-sulfide resistance and rechargeable batteries, the combined tools are an ideal fit for this environment.

Combining MFL-A/MD and XYZ technologies onto a 6” tool results in a compact design using a multiple-spring-mounted MFL body and a caliper body that contains the inertial mapping unit. The pull unit of the tool also houses the battery. The 8” to 20” tools that combine MFL-A/MD with XYZ technologies have a compact design using a lower-friction MFL unit with wheels on the magnet units and spring-mounted MFL-A carriers. The front drive unit of the tool houses the battery, and the caliper body houses the inertial mapping unit, including all of the tool’s electronics. Both tools, along with the rest of our upstream diagnostics tool fleet, can also operate as standalone caliper or standalone MFL-A tools. Thus, the Upstream Diagnostics Services tool fleet fits in the ROSEN toolbox approach and can be used in any medium. All of the inspection tools in this tool fleet meet or exceed ROSEN’s standard in-line inspection tool certification.

This article includes two separate case studies that show inspection tool velocity with pipeline operating pressures of 2,500 kPa or less. In both instances, the operator was unable to take the lines out of service for a tethered inspection, and it was too cost-prohibitive to use any supplemental gas flow. Both of the lines in question had multiple locations where 1.5D heavy wall fittings were present, and both had multiple above-ground riser locations. Both inspections required the use of a tool combining MFL-A/MD and XYZ technologies. The gas flow of the two pipelines could be manipulated manually from the launcher side of the pipeline. There were no major modifications made to either of the tools before the run to perform the service, and no data below was manipulated. The tools did not suffer any damage during the inspections and recorded within thresholds.

The final reports were made available within a 14-day timeframe from the inspection in both cases, and all findings were verified by the client.

A Canadian operator from northwestern Alberta contracted ROSEN to inspect an 8” sour natural gas line with a maximum allowable operating pressure of 3,200 kPa. Covering a total of 24 km, the line includes multiple risers with 1.5D 90° bends. After a successful gauging survey was completed, the minimum inner diameter of the pipeline was recorded at 190 mm, which is within the acceptable range of the combined tool’s passage capabilities. The pipeline parameters during the inspection would specify a maximum pressure of 2,000 kPa and a flow rate of 150 E3m3/day, which equates to a gas velocity of 2.2 m/s.

For this inspection, our team used a combination of MFL-A/XT and XYZ technologies. Additionally, the tool was equipped for an external pressure sensor to verify that the line parameters of 2,000 kPa were met. Figure 2 shows that the pipeline was within the range for the duration of the inspection, with a maximum line pressure of 2,100 kPa at 15,500 m. 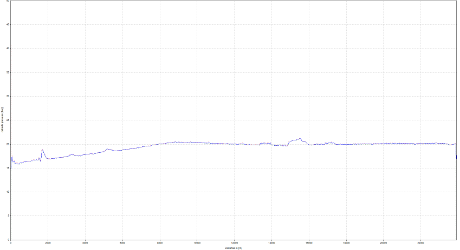 The tool was within its standard 0 to 5 m/s velocity range for 98% of the pipeline, with the majority being under 3 m/s. There is an area at roughly 16,000 m that was over the acceptable velocity due to a riser section where the tool needed the increased pressure to pass through. Closer to the end of the inspection, the velocity was increasing due to the gas flow being controlled from the launcher valve only. Below is a capture of the tool velocity, with the red line showing the maximum velocity capabilities.

Our integrity experts evaluated all of the data collected by the tool. After the client formally accepted the run, verification digs were completed.

Our Canadian experts were contacted by an operator in northeastern British Columbia looking to inspect a 6” sour natural gas line with a maximum allowable operating pressure of 9,650 kPa. With a length of 22 km, the line in question includes multiple risers with 1.5D 90° bends. A successful gauging survey was completed, and the minimum inner diameter of the pipeline was recorded at 140 mm, which is within the acceptable range of the combination tool’s passage capabilities. During the inspection, the pipeline parameters would specify a maximum pressure of 2,500 kPa and a flow rate of 100 E3m3/day, which equates to a gas velocity of 2.1 m/s.

To inspect the asset in question, our experts used a 6” tool combining MFL-A/MD and XYZ technologies. The tool was then equipped with an external pressure and temperature sensor used for verification purposes. During the inspection, the tool recorded an internal pipeline pressure around the 2,500 kPa mark, as seen below. The tool was within its standard 0 to 5 m/s velocity range for 99.7% of the pipeline during the inspection, with the majority being under 3 m/s. The tool behavior was similar for the duration of the line, except for a riser near the receiver of the pipeline, where it briefly reached over 5.0 m/s. Figure 5 depicts the capture of the tool velocity, with the red line showing the maximum velocity capabilities.

The collected data was evaluated, the run was formally accepted by the client, and verification digs were completed.

After having completed several inspections with low operating pressure and a growing database of tool behavior based on various conditions, ROSEN is able to confidently inspect lines at pressures as low as 1,800 kPa with standard in-line inspection tools. Through constant improvements to the inspection tools, we will be able to push the minimum pressure threshold even lower in the future.

Reacting to the growing need for solutions in the upstream gathering market, and in addition to the other services offered by ROSEN, the Upstream Diagnostics Service is a proactive approach to low-pressure inspections, offering full MFL-A, caliper and XYZ reporting. Ranging from 6” to 20”, our robust tool fleet offers multiple configurations and tool add-on options following the ROSEN toolbox approach.

This content was originally published in “Pipeline and Gas Journal.”