Rivers, Bends and Multi-Diameters – OH MY!

We know that having a full picture of every asset and an understanding of its condition along the full pipeline length is essential to safe and efficient operation. In-line inspection (ILI) tools have proven effective for collecting this knowledge for over 50 years; however, it seems there are pipelines that just were not meant to be fully inspected, and the only way to gain any insight into their condition is to dig them up.

Or is it? Pipeline digs are expensive, and, as the industry advances, there are ways for ILI to inspect even the most complicated pipelines. Of course, only inspecting part of the pipeline is not sufficient. Clearly, pipeline digs are sometimes needed (check out our article on “Why?! we need field verification” here). But gathering pipeline inspection data using ILI is essential for the safety, lifetime and performance of the asset.

The proposed inspection first came to ROSEN Canada from a Canadian operator. A decrease in diameter in the middle section of the pipeline was identified as a notable feature of concern, requiring inspection to further investigate and maintain details of the line as a whole. The specifications included a river crossing inspection with an 8” diameter (d) for 200 m; the line then transitioned down to a 6” d for 300 m, then back to the 8” d for the remaining 1600 m. The 8” sections of the line had previously been inspected, but due to the challenging nature of the multi-diameter pipe, the entirety of the line had never been inspected, providing the operator with very few details of this section. The operator was previously unable to reach a solution that would allow inspection of the subject segment without having to dig up the section under the river. ROSEN was approached in hopes of creating a solution that would allow the entire pipeline to be inspected.

COMING UP WITH A PLAN

After having assessed the line in its entirety – which meant gaining an understanding not only of the characteristics of its routing but also its operational conditions – and surrounding areas, ROSEN experts discovered that the main challenges would not only include the various diameters but also access. The pipeline had such a low maximum operating pressure that a conventional ILI tool was not suitable. In addition, how would a tool suitable for gathering data in a smaller 6” d line make its way through the previous 8” section without proper sealing to be propelled through. And how would it not get stuck when transitioning to the smaller diameter? It also became clear that a single tool would not be sufficient, as the 6” tool would not be able to achieve full coverage or collect complete data in the bigger sections.

To face these challenges, ROSEN Canada worked to create a new pull unit design for the 6-inch tool. This new design allowed the tool to be run through the 8” pipeline to successfully inspect the 6” section by using the ROSEN wireline truck along with the 6” and 8” bidirectional tools. In conjunction with the 6” tool, the 8” tool was prepared to capture the data within the first 200 m of the pipeline.

In order to provide a complete and effective report for the customer, the data evaluation experts then combined the data from the two sections. The team was able to combine the data sets from both tools by stitching together the data from each section. To ensure the sections were matched correctly, equivalent welds were used as matching points. The combined data sets then allowed the data evaluation team to evaluate the data as one whole pipeline and deliver a comprehensive report, providing the operator with valuable details to fill in the gaps in the details of the multi-diameter pipeline. 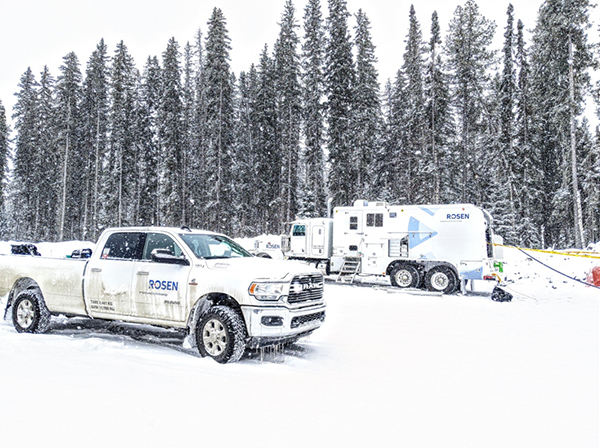 OPERATIONS: HOW DID WE DO?

Execution began by utilizing the wireline truck. The truck was set up at the 8” pipeline riser, approximately 200 m from a river crossing. To begin, we first ran a 6” and 8”, dual-diameter, bidirectional cleaning tool through the 6” section. This was a crucial step to ensure no debris would obstruct the smart tool. ROSEN then loaded the 6” axial magnetic flux leakage (MFL-A) tool into the pipeline and pumped it through the line using the wireline truck. The tool was launched and received successfully, with no issues through the line. We were then able to run the 8” bidirectional tool through the first 200 m section. Successful completion of both sections concluded the inspection process and provided an effective inspection of the pipeline in its entirety. Both runs were completed with no obstruction, 100% coverage and a consistent speed of 1.0 m/s.

The evaluation team was then able to execute the data analysis as predicted by combining and stitching together the two data sets. The complete report of the line was delivered to the customer 7 days later.

With the 6” section being the main integrity concern, ROSEN was able to work together with the operator to determine a plan that would allow for a complete inspection of the entire pipeline, in both the 6” d and the 8” d sections. This was done while not disturbing the river banks or doing any additional exposing of the pipeline via bell hole or hydrovac. ROSEN was able to provide a comprehensive data analysis report combining the 6” d and the 8” d sections. This ultimately not only safeguards the asset, it also reduces the risk of any unknown integrity flaws in the 6” section and minimizes the environmental impact of completing the inspection. Zach is the Business Line Manager for the Upstream Division within ROSEN Canada. This includes gathering, Mining and SAGD Facilities in both free swimming and tether inspections. He spent the last 13 years working for ROSEN in the Pipeline Integrity industry, participating in projects in North America and Europe. Starting in Field Execution and Tool Maintenance to Project Management and Technical Sales. Zach is a Certified Engineering Technologist in Instrumentation and Control Systems.