Eddy Current (EC) testing is based on electromagnetic induction. The technology can be used to detect flaws in conducting materials or to measure the distance between a sensor and a conducting material. The measurement does not require the tested object to be in direct contact with the test equipment.

The basic principle behind standard EC testing involves placing a cylindrical coil, which is carrying an alternating current, close to the test piece. The current in the coil generates a changing magnetic field, which produces eddy currents in the test piece. Variations in the phase and magnitude of these eddy currents are monitored using a second coil (search coil) or by measuring changes to the current flowing in the primary coil (excitation coil). 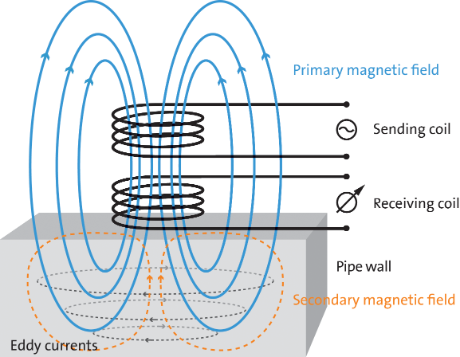 Variations in the electrical conductivity or magnetic permeability of the test object or the presence of flaws will change the flow patterns of the eddy currents and there will be a corresponding change in the phase and amplitude of the measured current.

EC testing can be used to inspect physically complex shapes and to detect small cracks on or near the surface of a test piece. The inspected surfaces need only minor preparation and need to be perfectly even. The technique is also used for measuring electrical conductivity and the thickness of coatings.