Magnetic Flux Leakage (MFL) testing is a widely used, Non-Destructive Testing (NDT) method for the detection of corrosion and pitting in steel structures. MFL is often used for integrity assessment of pipelines and storage tanks, but the principle can be applied to assets in any industrial sector.

The basic principle behind MFL involves magnetizing a ferrous metal object to saturation level with a powerful magnetic field. Where the object has no flaws, the magnetic flux will remain undisturbed. 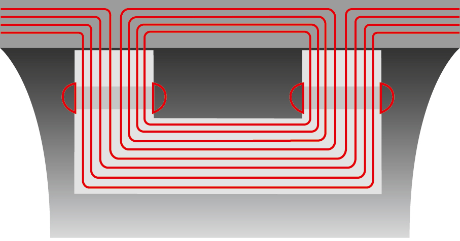 High magnetization levels are required to differentiate corrosion from other pipeline features such as hard spots, stress and strain variations and to minimize the effects of remanent magnetization and velocity.

Where there is internal or external metal loss, the magnetic flux leaks from the object.

In the MFL testing device, a magnetic sensor is placed between the poles of a magnet yoke to record the leakage field by Hall-effect sensors. Eddy current sensors integrated in the magnetic flux sensors are used to improve the differentiation between internal and external defects.

MFL is used to detect metal loss defects (such as corrosion) in a wide range of settings.